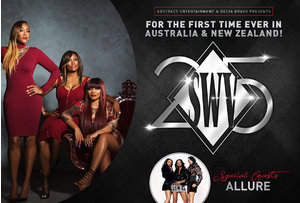 Delta Bravo and Abstract Entertainment are thrilled to present, for the first time ever in Australia and New Zealand, multi-platinum and Grammy nominated R&B legends, SWV (Sisters with Voices). Joining SWV will be fellow New York natives, Allure on their first return visit to Australia since 2011.

SWV came to public consciousness in 1992 with the release of their multi-platinum debut album, ‘’It’s About Time’’ which, boasted three of the biggest songs in R&B history, now considered classics, in ‘’Right Here’’, “’I’m So Into You’’ and ‘’Weak’’. Made up of Cheryl ‘”Coko’’ Clemons, Leanne ‘’Lelee’’ Lyons and Tamara ‘’Taj’’ George, SWV took the music scene by storm in the early ‘90s and remain as one of the R&B genre’s classic acts, to this day.

Recently honoured with the prestigious, ‘’Lady of Soul’’ award at the annual Soul Train Music Awards for their continued work in R&B, SWV’s influence on both female and male artists has been a mainstay in contemporary R&B. The group enjoyed subsequent releases on the ‘’Above The Rim’’ soundtrack, their second album, “New Beginning’’, which featured the hit ‘’Tonight’s the Night’’ with Blackstreet, and their third and final release, before taking a hiatus to pursue solo careers, ‘’Release Some Tension‘’.

The group returned to the spotlight in 2007 alongside R&B luminaries, Bobby Brown, New Edition and Blackstreet and in 2008 where they delivered an unforgettable performance alongside TLC and En Vogue during Alicia Keys’ set at the BET Awards.

Reuniting as a group in 2011 and featuring on the Chris Brown remix of ‘’Right Here/Human Nature’’, the ladies were recognised by VH1 in the Top 100 Women in Music list and by Billboard in both their Top 10 R&B Acts of the ‘90s list as well as being the number 2 top selling female group of the ‘90s.

Introduced to a new legion of fans in 2012 with a new album, ‘’I Miss Us’’, it was the launch of their own reality show ‘’SWV Reunited’’ which saw the ladies attract millions of viewers and return to the consciousness of contemporary r&b fans with their most recent album, “Still” released in 2016.

Allure, made up of original members, Alia Davis, Lalisha Sanders and Akissa Mendez signed with Maria Carey’s Crave label in 1997. Their debut single, ‘’Head Over Heels’’ (featuring Nas) was both a club and chart smash. Their cover of ‘’All Cried Out’’, which featured 112, was a top 10 smash hit in the USA, Australia and New Zealand and became one of the most loved R&B ballads of the era. Allure return to Australia, following a brief visit in 2011 and will be appearing in New Zealand for the first time.

SWV and Allure tour Australia and New Zealand in February 2018. Fans are in for a treat experiencing R&B royalty up close and personal in what will be a show full of smash hits, vocal acrobatics and plenty of ‘90s R&B vibes.