The A&R Sessions with Goetz Botzenhardt

The Gallery , London [All Ages] 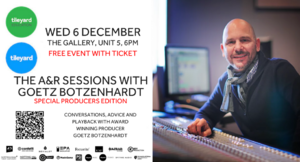 We are closing off our year of A&R Sessions with one of the biggest names in audio production, the award-winning Goetz Botzenhardt.

This very special A&R Session will run to the same format as previous sessions, except with a twist, this time we will be giving the spotlight to producers only. This is an amazing opportunity to receive insight from one of the masterminds in audio production, so remember to bring along a track. We will accept web links, files on a mobile, and files saved onto a USB.

Goetz has had an incredible career, he teamed up with Rollo Armstrong in the nineties and their collaboration led to many of the big dance records and remixes of the time. He went on to record and mix the first two highly acclaimed Faithless albums and then recorded Dido’s multiplatinum selling Album ‘No Angel’.

Encompassing a more eclectic combination of genres, Goetz recorded and mixed the Sugababes’ debut album ‘One Touch’, including their first hit ‘Overload’, as well as mixing for the Craig David, The Pet Shop Boys, The Cardigans, Bjork, The Cinematic Orchestra and Hikaru Utada, one of Japan’s most successful female artists.

Goetz has further expanded his skills into mixing for film and TV and he is the mixer of choice for renowned composers Christian Henson, Martin Phipps and Anne Nikitin. Goetz mixed Daniel Pemberton’s score for 2016 Oscar favourite ‘Steve Jobs’ directed by Danny Boyle.

For more information on our events and courses please go to: http://tileyardeducation.co.uk/