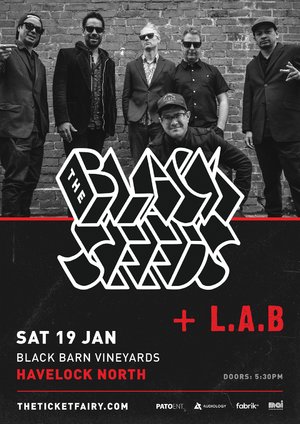 One of New Zealand’s most-loved live acts, The Black Seeds, will play a one-off show at Black Barn Vineyards in Havelock North on Saturday, January 19, with special guests, L.A.B.

The Black Seeds, led by the one and only Barnaby Weir (Fly My Pretties), have spent the last two decades taking the world by storm. Here in their homeland, they are revered stalwarts of the touring and festival circuit, while abroad they’ve remained at the forefront of Aotearoa’s internationally renowned live music movement, alongside the likes of Fat Freddy’s Drop.

While firmly based in the island grooves that inspired the birth of the band in 1998, The Black Seeds sound casts a wide net, laying funk, soul, Afrobeat and other eclectic elements over dub/reggae.

With a stash of albums and hits to their name, including ‘Cool Me Down’, ‘So True’, ‘Dust and Dirt’ and ‘One-By-One’, which became an international hit when it featured in an episode of the award-winning TV series ‘Breaking Bad’, The Black Seeds have clocked up multi-platinum sales and streams.

The band’s sixth studio album FABRIC, released in 2017, drew critical acclaim and confirmed their place in Kiwi music history as one of New Zealand’s favourite bands.

“They're rooted in the Kiwi summer psyche, a staple of your average wine and food festival or beachside tavern summer series; jandal-clad Kiwis will inevitably be nodding their heads to FABRIC this summer” - NZ Herald

The Black Seeds will share the evening with another Kiwi band, that’s fast earning a reputation as one of the country’s ‘must see’ live acts, L.A.B.

Founded by the legendary Kora brothers - Brad (drums) and Stu (guitar, keys) - and enlisting the talents of Joel Shadbolt (vocals, guitar) and Ara Adams-Tamatea (bass) from the mighty Katchafire, L.A.B. combine the trademark grooves of Kora with Adams-Tamatea’s reggae/dub experience and Shadbolt’s blues roots, to create a sound that’s entirely their own.

In 2017, the band released their debut self-titled album, showcasing an eclectic mix of reggae, electronic, blues, rock and funk, which solidified their place at the top echelons of the Kiwi music scene. It saw the band headline their own shows and draw large crowds at some of the country’s biggest festivals, including Rhythm & Vines, Northern Bass, Bay Dreams and One Love. They also supported Katchafire on their 24-date Australasian tour in 2016.