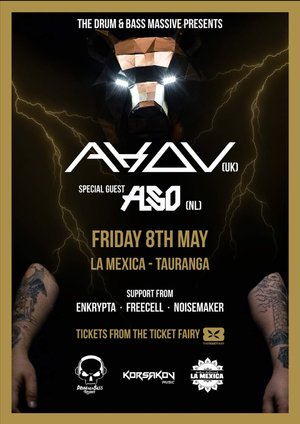 Friday 8th May at La Mexica on The Strand

With Support from: nOisemaker, EnKrYpTa, Dj Freecell and RTP

We are excited to bring AKOV to NZ for the very first time!

Get ready for a world class heavyweight night of #DNB and Neurofunk!

Uncompromising and loud, synonymous to the iconic bear logo he so frequently uses, AKOV is one of the fastest rising newcomers in the drum & bass scene. With an impressive list of shows and labels behind him in just 5 years, this artist has been under everyones radar and earned his place among the ranks of some of todays most exciting dnb artists. From hard hitting, intricately designed bass, tightly #executed drum parts and sci-fi-esque introductions to #constantly evolving arrangements with elements of classical, metal, hip hop and reggea coming through in some of his #releases, AKOV's style can be recognised almost instantly within a genre that is often #saturated with formulaic and recycled ideas. With each new release, AKOV keeps proving his ability to think outside the box and fuse together a great combination of both dance music and inspirational compositions. Half Russian and half English, this artist’s imposing persona takes that of the Bear and his high energy presence can be greatly felt when performing his DJ sets which have been #enjoyed internationally from small underground raves to large festivals.

Discovered by Neurofunkgrid's radar back in late 2013, AKOV was at the forefront of the new school resurgence that neurofunk has witnessed in the past few years. AKOV started releasing his music through the prolific youtube channel/label gaining interest from Artists such as Jade [Eatbrain] and AMC [Titan Records]

AKOV's first commercial release was through Belgian based Mindtech Recordings in 2015 of which the title track Mantra secured him a 1st place in the D&B beatport download charts for 2 weeks, seeing his music alongside many of his favourite artists. This small success propelled the artist into the international community and has paved the way for him to play an impressive checklist of shows across Europe Including the legendary 'Let it Roll Festival'.

2017 saw AKOV follow up his Mindtech releases with an impressive forray of dnb artillery from his 'Positive Energy' Single on Close2Death, to 'Space Bears EP' on Titans Records and 'Shapeshifter EP on Eabtrain Records. All of which were received with a plethora of praise from fans and DJs alike and clearly marked a huge progression in the artists work. 2018 followed with 2 more full Eps; The Initation EP on Bad Taste and Growing Pains EP on C4C. Between then and now, Alexander has revisited Eatbrain and C4C with the Symbiosis single and the U Want It EP, finally landing the attention of RAM Records who are set to release a set of tracks in December 2019

AKOV HAS PERFORMED IN THESE COUNTRIES: