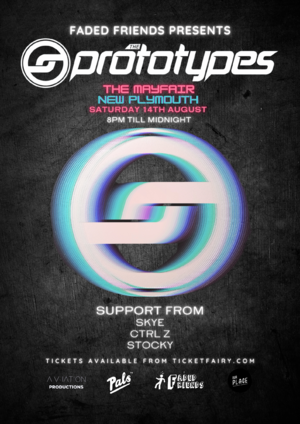 Faded Friends are excited to bring The Prototypes (UK) to New Plymouth this August!
With a huge AV production planned and The Mayfair being one of Taranaki’s best indoor venues, this is not a show you want to miss!

Some key things to know:

Come and enjoy a HUGE night of Drum and Bass in the middle of New Plymouth CBD.

Tickets are limited so get in quick to secure your spot now so you don’t miss out! 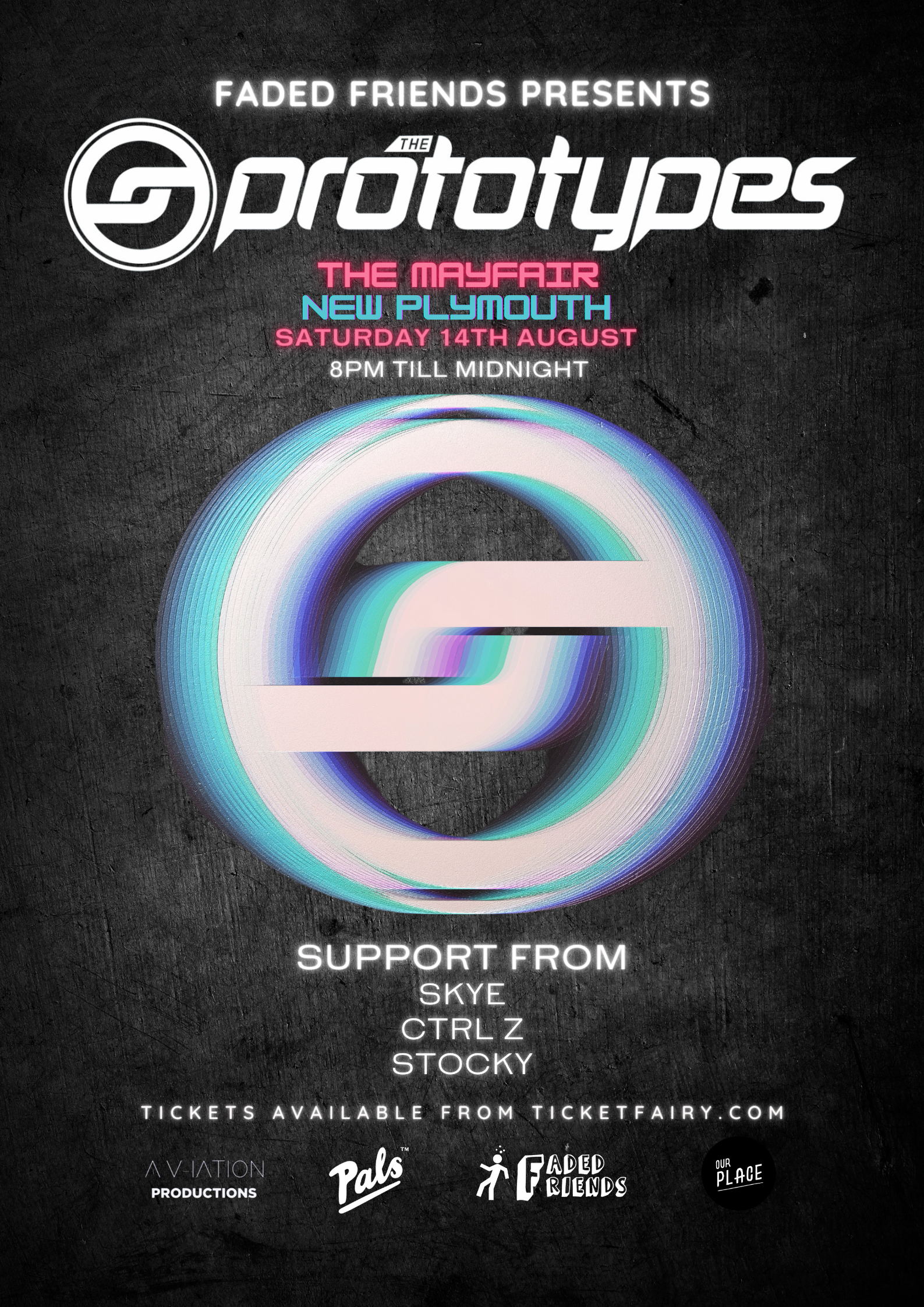 If you could capture everything The Prototypes are about and pack it into one simple, universal essence, it’s this: All or nothing.

No half measures, no shortcuts, full commitment to the vision: It’s what Nick White and Chris Garvey stand for, it’s what they sound like, it’s how they write, it’s how they perform. It captures everything you need to know about the Brighton duo… From their earliest roots as young DJs both putting on nights on the south coast when they met on pirate radio in the mid-2000s to the moment they formed officially as The Prototypes in 2010, signing their first record – the evergreen anthem ‘Cascade’ – to J Majik’s Infrared.

“That’s us in a nutshell. We fully concentrate on things. We’re hands-on. Whether that’s the music, the label, our DJ sets. We can’t imagine working in any other way. Why would you?’

Their ‘all or nothing’ mantra captures everything that’s since followed… Their potent, hard-hitting production signature and broadsword body of work on seminal labels such as UKF, Viper Recordings, Shogun Audio, Ram Records, Technique Recordings and Formation. Anthems that have been supported across the entire d’n’b scene such as ‘Pale Blue Dot’ (Beatport’s highest selling drum’n’bass tune in 2015 and nominated as Best Tune in the Drum&BassArena Awards), ‘Pop It Off’ and ‘Kill The Silence’. Their expansive and versatile remixes of acts ranging from Ed Sheeran to Avicii to Friction by way of their sought-after bootlegs of Fisher and Knife Party and unreleased dubplate remixes of Bad Company and Pendulum. Not to mention their extraordinary debut album ‘City Of Gold’ that exploded in 2015. Hitting 22 in the UK Dance Chart, ‘City Of Gold’ took them around the world several times over and elevated them to headline status.

Their label Get Hype is another example. Launched in 2016 with the still-massive ‘Rocket Guns Blazin’’, the duo threw themselves neck-deep into it, schooling themselves in a whole other side of the industry, developing acts such as Glitch City, Malux, Richter, AC13 and Levela and working with certified legends like DJ Rap and Leeroy Thornhill, hosting label tours and selling out Fabric. Investing their full energy and attention into establishing the tour-de-force status it has today, they’re all or nothing drive on the label slowed down their release rate… Temporarily.

“It took us a while to get back into the zone, really work out what we wanted to do, what we love about this music and what we want to contribute to it. Then throw everything we fucking can at it! ’10,000 Feet & Rising’ is that. It’s us being us.”

Crashing into a new decade with every bit of brute force and basslines, ‘Ten Thousand Feet & Rising’ is the ultimate embodiment of The Prototypes’ fierce ‘all in’ spirit so far. The long-awaited second album, it’s the sound of intense studio lockdown, refining, rewriting and rebooting the passion for the music that brought them together in the first place. A daring document that traverses the tempos and digs deep into some of the strongest foundations of rave culture, it’s their most ambitious body of work today and, once again, it captures everything that Nick White and Chris Garvey have always been about for 10 years and counting, ten thousand feet and rising. All or nothing.