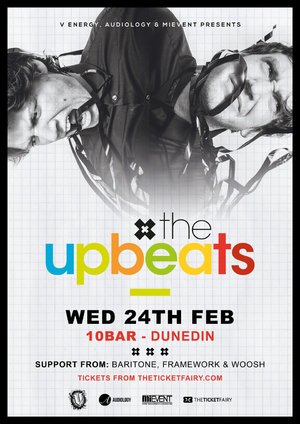 With Hullabaloo on Tuesday night, The Wall on Thursday plus Drumsound and Bassline Smith on Friday we thought why not just make it a week long bender? So we did.

Support from Baritone, Framework and Woosh.

In today’s heady climate of bass-fuelled dance music it could easily be argued that producer-DJs are the new rock stars. Climbing into that mould with a pair of schoolboy grins on their faces, The Upbeats have already been playing that role for years. Their anything-goes live performances are renowned for mosh pits, topless dancers (sometimes women) and crowd surfing, while their approach to writing hard-hitting, unique-sounding drum & bass is lauded across the globe.

Nicknamed Terror Snake and Downie Wolf respectively, Jeremy and Dylan are not your average, boring producers. Meeting at school through mutual interests in surfing, skating and ‘being gangly teenagers’ Jeremy had to work hard to pull Dylan into the world of drum & bass. But, armed with a stack of Mickey Finn & Aphrodite mixtapes and an unrelenting attitude, the snake soon overcame the wolf’s natural propensity for rock music and, fortunately for us all, a love of fast breakbeats and low-slung basslines soon followed.

This love soon grew into a passion for creating their own music and by 2001 the pair were balls deep writing their own D&B. Fuelled by New Zealand’s isolation from the rest of the world and its staggering natural beauty, The Upbeats’ unique take on 170bpm+ bass music has seen the duo work alongside scene stalwarts such as Ed Rush & Optical, Bad Company, Hive, Gridlock, Bulletproof, TREi, State of Mind and Noisia while releasing tracks across a plethora of the D&B scene’s most respected record labels.

In the wake of such a prolific impact on the worldwide drum & bass scene, The Upbeats continue to push the boundaries. Working on producing an album for award-winning New Zealand live act Shapeshifter and collaborating with US bass music superstar Bassnectar this is set to be the most exciting season for The Upbeats yet, for precisely one reason: the duo’s forthcoming fourth studio album set to be released on Noisia’s increasingly imperial Vision Recordings.

Amongst the incredible list of singles for legendary D&B outlets like Ram Records, Virus, Commercial Suicide, Subtitles and Lifted Music, and production and remix credits for some of the hottest names around, from MSTRKRFT to the aforementioned Shapeshifter, The Upbeats have displayed where their true strength lies; releasing critically acclaimed, boundary pushing and excitement-inducing long players. From their debut album on New Zealand’s LOOP Recordings through their sophomore offering ‘Nobody’s Out There’ on Bad Taste to 2009’s ‘Big Skeleton’ released on their own Non Vogue imprint, The Upbeats have consistently impressed with a deep understanding of what makes a dance music album great.

Perennially packed with enough energy to rock the floor and backed up with genuine emotion and an infinite capacity to inject a taste of something different into their music, The Upbeats’ albums drag you deep into their own personal world of drum & bass. That’s a world which is infused with the duo’s sibling-like relationship, a propensity for having fun, unusual food combinations at breakfast time and an unnerving amount of insect-based facts. Not only are The Upbeats producers with studio skills, they’ve also got a few things which link them to all the best artists in history; bags of character, endless amounts of fresh ideas and a large dose of friendly rock star attitude.