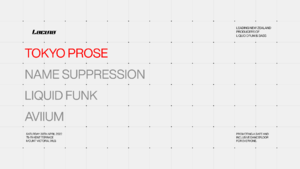 TopInfluencers
Closing out April, we host our first ever fully liquid drum & bass night. Headlined by Tokyo Prose aka Sam Reed, who is coming off a stellar EP release on The North Quarter titled ‘Twelve Tones’, this will be one of the first gigs since last year for Tokyo Prose.
The show is on the 30th of April. Tickets for the night will go live at 7pm, Monday the 18th.
Bio:
Sam Reed aka Tokyo Prose is the leading producer of liquid drum & bass in NZ. His music has been released on Soul:r, Samurai Music, Hospital Records and his most recent album “Wild Grace” was released on Lenzman’s emergent The North Quarter label. His music is regularly supported by many of the scenes biggest names including Calibre, Lenzman, Hybrid Minds, LSB, DJ Marky, London Elektricity and many more.
For a career of over ten years’, Tokyo Prose has a succinct and carefully managed back-catalogue of music. He has a deliberate, restrained, and soulful production style with a firm focus on musicality and groove.
Support:
Name Suppression
Liquid Funk
Aviium
TopInfluencers