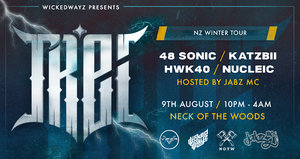 TREI & Jabz MC
(Viper Recordings)
TREi, AKA Trevor Linnell, has been a leader in the drum and bass scene down under since 2007. With a slew of producers coming from Australia and New Zealand including Pendulum, ShockOne, State of Mind, and Concord Dawn, TREi has made a name for himself with releases on prestigious labels such as: Viper Recordings, Technique, Commercial Suicide, SOM Music, Shogun Ltd, Samurai Music, and Uprising Recordings.

Fresh back from his European tour playing some of the biggest festivals such as Trident Festival (Slovakia), Fusion Festival (Germany), Beats For Love (Czech), & still to come Habitat Festival (Germany) & Rampage Open Air (Belgium) he will undoubtedly be packing some serious heat & set to destroy Neck of the woods.

Neck of the woods