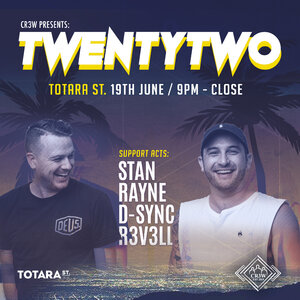 TopInfluencers
Finally we can return!

And we are super excited to re-announce!

Since the inception of Twentytwo they have played throughout Asia, Australia and the Pacific. As well as playing some of the biggest festivals in New Zealand, Bay Dreams, Ohakune Mardi Gras & BlueSky Fiji. Refining their skill has led them to be a “go-to” NZ support for some of the biggest names in the game such as:

Twentytwo started in 2010, under the alias Club22kids, they were the Breakfast hosts on New Zealand's premier dance music station UPFM. Originally, they were making Electro and Progressive House. They had releases on Plasmapool including “Elevators” which cracked the Beatport Top100 as well as multiple releases making Ibiza Compilations. This success led to bookings around New Zealand with Rhythm & Vines and other top festivals.

In 2016 they said goodbye to the brand Club22kids and set out to streamline their alias and create a new brand, a brand that was truer to their musical passion, Drum & Bass and Bass Music. At the end of 2016 they played their first Twentytwo set, opening for NERO!!

See you fellow frothers in there!!