The National Auditorium , Avarua [All Ages] 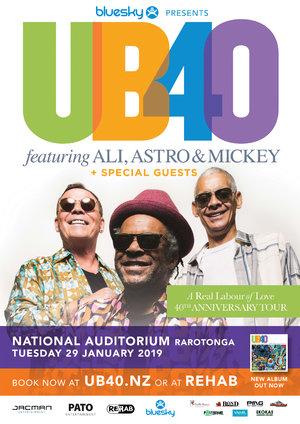 In addition to their previously announced dates in New Zealand and Australia, the legendary reggae band - who earlier this year released A REAL LABOUR OF LOVE, their most successful album for 25 years - will play The National Auditorium in Rarotonga on Tuesday 29 January 2019.


With 2019 marking 40 years since UB40 first performed live, the reggae icons will be celebrating with a ‘greatest hits’ set that features global smashes including ‘Red Red Wine’, ‘Cherry Oh Baby’, ‘Rat In Mi Kitchen’ and ‘Kingston Town’. Ali, Astro & Mickey will be joined on-stage by their incredible eight-piece band.

Tickets for this show go on sale to Bluesky customers on Wednesday July 18 2018 and to the general public on Thursday July 19.

Ticket and venue information for all shows at www.ub40.nz