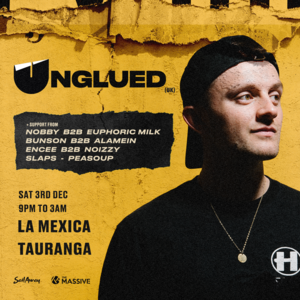 One of Hospital Records most captivating artists makes his return to Aotearoa, after a sell out tour with Degs (UK) in May this year.
Unglued is regarded as one of the most versatile and technically gifted Drum and Bass producers of his generation.
He has risen up the ranks since his breakout into the scene in 2019, showing no signs of slowing down since.
From ravers on the ground to A-list DJ’s in booths and studios, the D+B universe has had one name stuck in their minds, Unglued.
First releasing on the 2017 ‘Hospitality In The Park’ compilation with ‘Ay!’, he swiftly upped the levels with ‘Bootstrap Bill’. It’s decimated dancefloors across the globe with spins from the likes of Andy C, Danny Byrd, Randall and Hospital Records’ label boss London Elektricity, as well as receiving widespread support on the airwaves from Metrik, Noisia, Skankandbass and BBC Radio 1’s Rene LaVice.
The enigmatic Unglued is also the proud owner of 2018’s most sought after dubplate. His bootleg of High Contrast’s anthem, ‘If We Ever’ has had everyone talking, catapulting him straight into the stratosphere of the D+B elite.
He’s already been tipped as one to watch by bass powerhouse UKF and internationally renowned magazines DJ Mag and The Wire. From bedroom DJs to A-list selectors, everyone wants a piece and for good reason. It’s no surprise he’s now been picked up by the leading label in the game Hospital Records with an exclusive signing. Welcome to the family, Unglued!
TopInfluencers