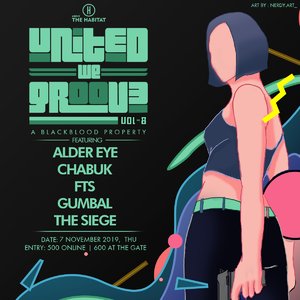 Alternative sounds from the suburbs and all around, we bring to you United We Groove Vol. 8! This time, we’re coming to Above The Habitat - Comedy and Music Cafe in Khar on Thursday, 7th November. We have a special mix of a lineup featuring Alder Eye, Chabuk, FTS Music, Gumbal and The Siege.

Chabuk
Founded in 2017, Chabuk is a Mumbai based, four-piece Hindi rhythm & poetry outfit, whipping up rhymes that are lyrical, groovy and heavy-duty. They released their debut EP ‘Downmarket’ earlier in June this year.

FTS
FTS is a hip hop crew from Mumbai who delve in the tracts of hip hop, space, pop and element. Their high energy live performances are to look out for. FTS also features Mumbai hip hop artist Tienas.

Gumbal
Gumbal is a Mumbai based alternative space rock band. Having released a well-received electro acoustic EP called 'A For', vocalist Arjun Iyer & bassist Satish Sridhar got together with ex Blek drummer Varoon Aiyer and Spud in the Box guitarist Siddharth Talwar, which has led Gumbal's sound into a fascinating mix of alternative space rock and electronica.

The Siege
Siegen Moopanar a.k.a The Siege, born in Bangalore, grew up in the suburbs of Mumbai. At the age of 21, he released his debut album titled ‘Bubblecars’ independently. This self funded album brings out a sound that Indian Hip Hop has never heard of before. Teaming up with producer Anand Iyer, Siege delivered an album that is almost a movie. This album digs deep into his personal struggles and issues with mental health which makes the story authentic and real.