Above The Habitat , Mumbai [All Ages] 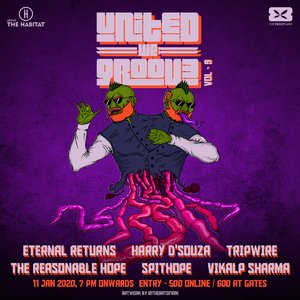 A mix of Punk and Post Rock with dashes of Groove and Thrash Metal mixed with some blues and singer songwriter makes United We Groove Vol. 9! This time, we’re coming to Above The Habitat - Comedy and Music Cafe in Khar on Saturday,11th January. We have a special mix of a lineup featuring Tripwire, The Reasonable Hope, Eternal Returns, Vikalp Sharma, Spithope and Harry D'Souza

Tripwire formed in 2002 just completed 17 yrs on the circuit. A rock solid line up comprising of Amey, Jack and Shaggy tested over 150 national and international shows . The band over time has 3 releases to its credit comprising of 27 songs. Most of the music is available on www.reverbnation.com/tripwires .
Predominantly a 3 piece outfit the band adds an additional guitarist to its line up, Jitu (lovingly known as baba) from Rainvan fame joins the band from this show onwards as a permanent fixture to the line up, he has previously played with the band on recordings and at Great Indian Rock and Independence rock

The Reasonable Hope is all about getting inspired by the space around oneself; expressing thoughts and narrating stories through instrumental pieces and cohesive songwriting.We play guitar and effects based extended instrumentals, incorporating mellow bass lines and ambient soundscapes.

Eternal Returns
Eternal Returns is a Groove Metal outfit who's name is derived from an inherent concept of Indian philosophy which firmly believes that the universe has been recurring and will continue to do so. Fast riff attacks and heart thumping low ends are some things you'd experience in ER pits


Vikalp Sharma
Vikalp is a self taught composer, singer, guitarist & producer living in Bombay. His music is influenced from the sounds of the 60's & 70's. Vikalp also plays guitars for Daira which is arguably one of the best Hindi Rock acts to come out of India

All the members of this Delhi based progressive thrash outfit come heavily influenced from different genre backgrounds and converse onto this one way street called Spithope. They specialise in creating mind melting soundscapes with powerful lyrics and intricate grooves