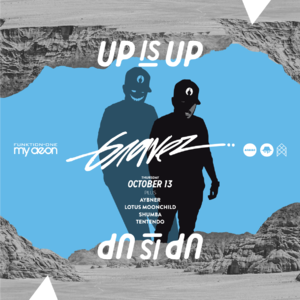 Week 2: After accumulating over 4,000,000 plays within a time span of four months, 22-year old Atlanta-based rising producer Gravez has made a name for himself with reinterpreting music from the likes of Drake, Jaden Smith, Travis Scott, Rae Sremmurd, The Weeknd, Justin Bieber, Goldlink and much more. With his futuristic and artful style, you can expect the young and rising Atlanta native to expand his repertoire to much bigger things in 2015. Gravez has continuously provided stellar back to back releases whose sounds have accumulated the attention of collectives such as Soulection and HW&W Recordings as well as being featured on Hypetrak, Diplo & Friends, BBC Radio, Okayfuture, Hillydilly, DoAndroidsDance, Earmilk, Pigeons & Planes, Indieshuffle, Complex, DJ Booth, AshleyOutrageous and more. On support duty: Aybner, as described by Stoney Roads, The Melbourne based young-gun is reminiscent of earlier Shlohmo and Jeremih in terms of it's slow, brooding tone. The Operatives Lotus Moonchild, Shumba and fresh pick of the week: