WE KICK ON ft ENSCHWAY 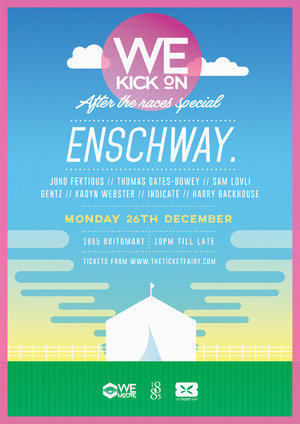 WE KICK ON (After The Races Special) Feat ENSCHWAY (AUS)

We Mouve brings you WE KICK ON, for anyone wanting to carry on the Christmas Party or Kick on after the Boxing Day Races. We have chosen to headline the show, inthemix's #1 to watch out for in 2017 ENSCHWAY.

It hasn’t taken long for Enschway to become Australia’s next big thing.

Sydney’s Nicholas Schweighoffer only put his first track on SoundCloud less than 12 months ago and already, he’s built up a huge following with high-energy songs that pack a big dose of bass, a punch of synth and a hit of melody. Triple j are on board, big dons like Diplo and What So Not are paying attention and millions of listeners have already signed their approval.

It all started with Timezone, the Luude collaboration that’s still being rinsed in clubs around the country. Then Nick dropped the three-track Friendschway EP, which went wide and saw his LOLO BX collaboration Counting On You clock up close to 400,000 SoundCloud streams.

Even trap superstar RL Grime is a fan. “I woke up one morning and he’d sent me a message on Twitter saying ‘hey, sick music’. Can you send me some on an email?’” Nick explains. “That was pretty massive, he’s an idol of mine.”

Then the big moments kept on coming for Enschway: in the last few months alone he’s played headline support slots for superstars like Baauer and Jauz, ticked off a raucous set at Splendour in the Grass, toured Australia with Stooki Sound, had his track dropped on the Electric Daisy Carnival stage by Brillz, been tapped for a set at the debut edition HARD Australia, been featured on Skrillex’s Nest HQ blog and dropped a remix for Slumberjack on Diplo’s label Mad Decent.

Things are only set to get bigger with Nick’s next release. This summer Enschway will drop the Friendschway EP: Volume 2.

Big name US producer Graves plus locals Crystalize, O5CAR and fast-riser Kuren all got in the studio with Nick for the EP, which runs the gamut from synthy numbers to straight-up bangers and what Nick affectionately terms “stupidly disgusting bass music”. As Nick puts it: “It’s a few different styles, but they all come back to the same chords, progressions and themes.”

See you guys there!