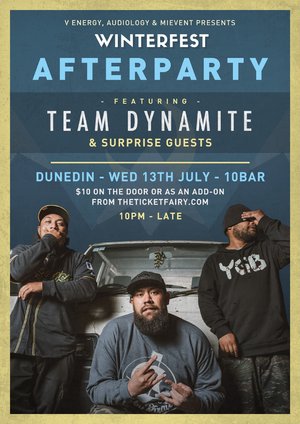 We're giving the first 50 people to purchase their Winterfest 2016 tickets online a free afterparty ticket, get it quick!

Team Dynamite's music will make you dance at a funeral. played twice a day, it'll make your plants grow up to 3 times faster. It’s the kind of music that makes you wanna hug the bus driver because he opened the door for you. It's feel good music.

Off the back of their quality feel good street music, Team Dynamite have performed up and down New Zealand, shared stages with US hip-hop legends like DJ Premier, Mos Def and Jurassic 5, toured nationwide with Ladi 6 and performed at the likes of Rhythm & Vines, Alps, Discombobulation & Homegrown.
Their latest single MARVIN featuring LAUGHTON KORA is out now, watch it here - https://www.youtube.com/watch?v=2nuWQ3j-vD4