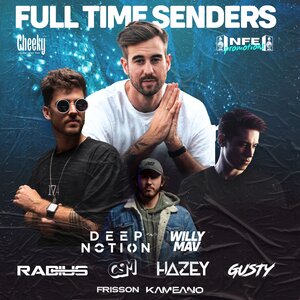 TopInfluencers
Full Time Senders and NFE Promotions are exceptionally pleased to present:
DEEP NOTION | feat. special guests Willy Mav & Hazey
----------------------------------------
To mark the one year anniversary of NFE promotions and the collaboration of FTS and Cheeky Iced Tea, we thought it only fitting to bring a send for the ages to Love Not Lost.
A line-up that needs no introduction. Some of New Zealand's most talented disk jockeys are ready to guide you through a masterclass for the evening. Accompanied by two extra special, special guests and a stacked line-up of local support.
Deep Notion:
Deep Notion is rapidly becoming one of New Zealand's hottest up-and-coming acts. No stranger to 4 decks, his sets exude energy and intensity, which flow deep into his production. With releases on UK-based labels Serotone Recordings, Night45, and having recently had songs promoted by Bass Rabbit, Jump Up Cave, Raving Panda he is sure to bring some serious heat.
SPECIAL GUESTS
WILLY MAV:
Willy Mav, aka, Willy Harman is a must watch artist within the drum and bass scene. Hailing from New Zealand, he started producing from his bedroom at the age of 13 and found his passion for Drum and Bass in 2017 after hearing it consistently at house parties, clubs and festivals. Fast forward 3 years, he’s gone from strength to strength from huge releases to supporting some of the worlds biggest names in drum and bass.
HAZEY:
Hazey is making waves throughout the NZ DnB scene and with a stellar release 'Back To Life' under his belt and collection of dubs that he is currently sitting on, the sky's the limit for this DJ and Producer.
Having already played at some of New Zealand's most sought after events and playing support for multiple international acts such as Kanine, Turno, K Motionz and Pola & Bryson (to name a few..).
Hazey is most definitely one of New Zealand’s fastest growing talents.
SUPPORT INCL: