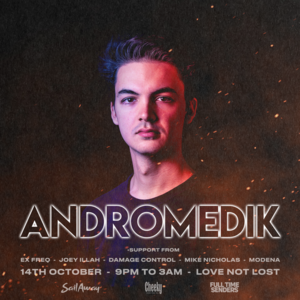 While being relatively young for the Drum and Bass scene, Andromedik (born in 1998) from Belgium has already made an imprint in the scene. A musician who distinctly distances himself from a lot of producers with an almost ‘festival’ sound design, while having classical/jazz training for over 10 years.
It’s clear why Andromedik is supported by the biggest names in the scene such as Netsky, Sub Focus, Delta Heavy, Jauz and more.

With lots of releases under his belt and having worked with other talented musicians such as Ayah Marar, it only seems logical Andromedik has over ¼ million monthly listeners on Spotify and this may also be the reason you can hear Andromedik songs playing on national Belgium radio a couple of times a week. This all led to his nomination for the ‘World's Best Newcomer’ in 2019 by the Drum and bass Arena Awards.