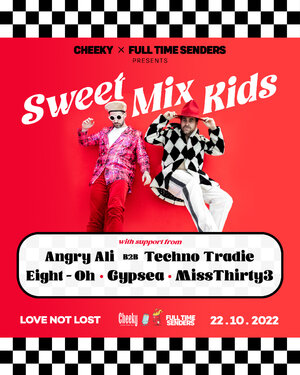 To celebrate the announcement of a new flavour to their range, Cheeky have tasked us with the honour of hosting the Wellington release party.

The first 200 ticket holders will be given a drink token to enjoy the latest Cheeky alongside a multi-genre night featuring the 80's, 90's and today!

And with a new album release called 'Stargazing' on the 7th October, it was only fitting to have the Sweet Mix Kids leading us into the night!

In 2019 they were finalists for Best Electronic Artist at the Vodafone New Zealand Music Awards.

Sandon James and Chris Scott embody versatility & taste both in the studio where they produce the full spectrum of modern music, and onstage; where they incorporate electronic drums & samplers, live instruments, guests vocalists and dancers, mixing every genre in flamboyant live performances.

In 2021 they released their debut full length album ‘Radio With Pictures’ – Followed by the collaborations project ‘Remix With Pictures’ including remixes from top international producers via Istanbul, New Jersey, Titirangi, Melbourne, Wellington & Texas. Despite the pandemic they performed live for over 100,000 people last year at shows and festivals, ‘Radio With Pictures’ was supported by a 12 stop NZ wide headline tour with full band.

2022 sees the release of their sophomore album Stargazing, with a remote secret location NZ Launch party, followed by a series of international listening parties