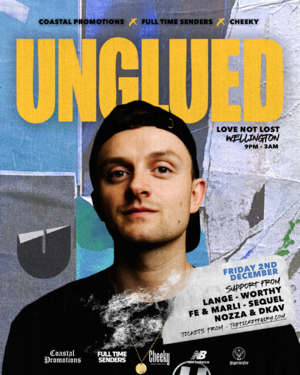 One of Hospital Records most captivating artists makes his return to Aoterora after a landmark sell out tour with Degs (UK) in May this year.

Unglued is regarded as one of the most versatile and technically gifted Drum and Bass producers of his generation. He has risen up the ranks since his breakout into the scene in 2019, showing no signs of slowing down since

Thanks to our sponsors at Cheeky, Jagermeister & New Balance.