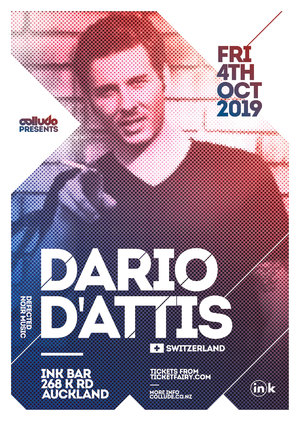 With a career spanning over two decades, Dario D’Attis remains one of the most prominent underground artists in house music. His contemporary and uplifting style of production paired with his vibrant and dynamic sets have continued to push his career to new heights, gaining radio traction and huge support from tastemakers and house lovers alike.

A recent string of releases on Defected have shown how Dario is continuing on with his prolific nature of working, building an impressive discography of his own productions as well as remixing huge tracks. 2019 has already seen the release of ‘Space & Time’. One of the first releases for Defected's twentieth anniversary year, as well as his anticipated remix of Kings Of Tomorrow and Julie McKnight’s ‘Finally’.

BIO:
Dario has been releasing music since 1999, which has seen him become a regular DJ on the Swiss underground club scene for many years. However in the past three years Dario has started to attract the attention of global audiences with the likes of Marco Carola, Åme and Dixon supporting his music.

With recent releases on Hive Audio, Noir Music, Poker Flat Recordings, Strictly Rhythm and Defected Records have catapulted Dario into the spotlight, with tracks like “The Good Old Days” being a firm Ibiza anthem. This year his remix of Soul Vision “Don’t Stop” further made an impact in clubs around the world.

Alongside this growing international rise, Dario has been heavily involved with Hive Audio; leading to a residency at the legendary Zurich nightclub, HIVE.

2017 will see him push the envelope further on his productions, with original releases and remixes lined up on several high profile labels as well as a touring diary that sees Dario play across Europe and North America.