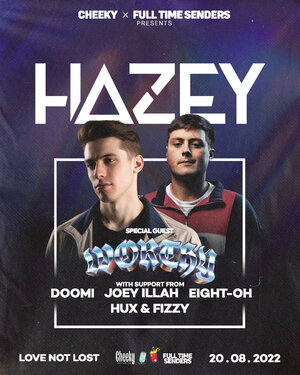 -- HAZEY --
Hazey, also known as Charlie Spicer, is not a new name to the NZ Drum and Bass scene and has truly cemented himself as one of the most exciting producing and DJ talents in NZ  since making his debut in 2019.

His rise to the forefront of the NZ DnB industry has been truly remarkable and stems from his diverse involvement in the scene. From being the founder of the successful Auckland based promotional company Synergy Events where he is responsible for supporting several up and coming DJs and Producers in Auckland, to his electronic DJ sets (and his impressive high jumping skills) and now showcasing a new element to his artist profile with his slick production that has truly captured a lot of attention. The sky's the limit for the still very young Artist.

With a nationwide tour already under his belt which included centers such as Christchurch, Dunedin, Palmerston North and Auckland while also playing in his hometown of Waihi on a number of occasions it is fair to say that Hazey has dominated the NZ Club circuit. His reputation has earned him slots to play alongside some of the biggest names in drum and bass and bass music such as Bru-C, Quix, Delta Heavy, K Motionz, Turno, Pola & Bryson, Mr Traumatik, Montell 2099, Kanine, Document One, MC Tali, Lee Mvthews, Flowidus, Hedex, Dutta  and many many more. His big show mentality has seen him also play some of the biggest shows in New Zealand such as Rhythm and Vines, Gold Rush Festival, and finally several sold out shows at Studio the Venue in Auckland in front of thousands of people.

Worthy is a Drum and Bass artist who hails from Auckland, New Zealand but was born on the East Coast of America. He is the CEO & Founder of Coastal Promotions alongside close friend and Co-Founder Elisara. He has solidified himself as a leading force within the student and underground drum and bass scene over the past 4 years. Starting Coastal Promotions while studying in Wellington, he has risen the brand and himself as an artist to the forefront of the genre sub-scene.

Holding Club Residences at Wellingtons Club 121 & Dunedin’s Catacombs Nightclub, along with a past international stream residences on Bloc2Bloc, Worthy’s reach extends far and wide. His past mixes have reached the Number 1 spot on both the NZ New & Hot and Drum and Bass charts on Soundcloud.

Under the Coastal Collective Worthy has performed at some of the countries biggest festivals, including Rhythm & Vines, Rhythm & Alps, Bay Dreams, 121 Festival, Mardi Gras Ohakune & Queenstown, Soundspash Timaru, 121 Festival, Baseline, Outfield, Tea Party, Garden Party and The Longline Classic. His sets are known for versatility, with a weight towards the heavier, stadium sound of Drum and Bass.

$8 Cheeky if you're feelin' it!
TLDR;
WHEN: Saturday, August 20th - 21:00 - 03:00
WHERE: Love Not Lost, 24 Allen Street
HOW: Limited tickets available on Ticketfairy.
WHY: That's the question we must all ask ourselves
TopInfluencers