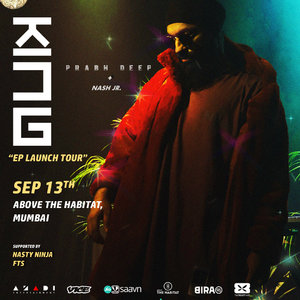 Azadi Records is extremely proud to announce the K I N G India tour by Delhi-based Hip-Hop artist Prabh Deep. He will be performing at Mumbai on the 13th of September! The gig will be supported by Nasty Ninja and FTS.

About K I N G - Prabh Deep's latest EP
Offering a different sonic experience to his critically acclaimed debut Class-Sikh (produced in collaboration with Sez on the Beat), Prabh Deep's new EP, 'K I N G' is an amalgamation of juicy basslines, catchy hooks and hard hitting lyrical delivery. The EP is produced by Prabh Deep himself and features a string of guest appearances by some of Delhi's finest musicians. K I N G details Prabh Deep's versatility as a songwriter - deftly switching between smooth, wavy pop-hooks and raucous political verses.

Nasty Ninja
Nasty Ninja is a rap/RnB artist from Mumbai, India who writes in Hindi and English. Previously known as MC Shinobi, he adopted the stage name Nasty Ninja with his new body of work. Ninja's music is melodious and groovy, catering to all types of audiences with influences of pop, rap and electro rap. He has performed across the globe and is also a part of hip hop ensemble 'Mumbai’s Finest'.

FTS Music
FTS is a crew from Mumbai who delve in the tracts of hip hop, space, pop and element. Their high energy live performances are to look out for.