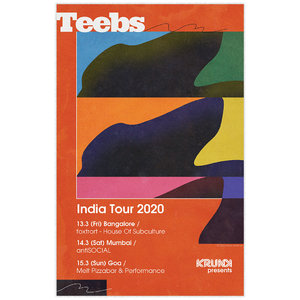 Teebs was born Mtendere (pronounced ten-de-ra, which is Chichewa for peace) Mandowa in New York to parents from Malawi and Barbados. He is an electronic musician and painter who bounced around the East Coast before finally planting his feet in the Southern California suburb of Chino Hills. A member of Flying Lotus’s Brainfeeder label and the ‘My Hollow Drum’ Collective, Teebs's style has been referred to as "beat music," a style which involves recording, layering, altering, and organizing several sounds including, harps, shakers, drum taps, and even tape peeling. Teebs released his first album, Ardour, on Brainfeeder in 2010. LA Weekly called it "one of the most delicate and lovely albums of the year.” His paintings have been exhibited at New Image Art and Space1520 in Los Angeles, and he has collaborated on clothing designs with Ron Herman Japan and Obey Clothing.

GiGi FM aka Giulia Fournier-Mercadante is a French/Italian force well and truly to be reckoned with.

Born and raised in Paris, Gigi moved to New York in her teens after being awarded a dance scholarship at the NYC Ballet and Alvin Ailey where she studied and practiced dance at the highest level before moving onward to her current residence of London where she continues to make waves with her unique approach to Music, Sound, Dance and Art.

It wasn’t long until she became a firm fixture of South-London’s close-nit music scene, taking part in organising parties in DIY spaces and DJing regularly across the city (with regular appearances at London’s revered ‘Make Me’ parties). Listing Donato Dozzy, Bjork, Function, Neel, Aleksi Perrälä, Pierre Henry, E. Satie and Suzanne Ciani to name a few among her musical influences, Gigi is as creative in the studio as she is on the decks.