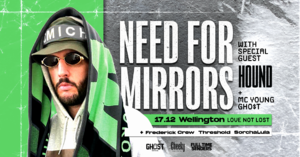 Rounding off a huge twelve months for both Ghost Media and Full Time Senders, we have none other than Aotearoa's own prodigal son, NEED FOR MIRRORS, joining us for our final night of the year.

He will be flanked by a handpicked selection of some of the country’s finest selectors for a full-spectrum night of rolling DnB, with support coming from HOUND, FREDERICK CREW (Vinyl Set), SORCHALULA and THRESHOLD, as well as host MC YOUNG GHO$T. Huge!

One of the scene's most enigmatic and experimental producers, Joe Moses aka Need For Mirrors has been making music since 2009. With releases on iconic labels such as Metalheadz, ThirtyOne Recordings and V Recordings, he is no stranger to the deeper side of DnB, and is well known for producing emotionally moving music which resonates throughout the rave.

Be it through his DJ sets or productions, he makes and plays drum & bass that both spans the board and challenges typical formulas and conventional boundaries. With nothing but the dance in mind, Joe covers every chapter of the night. The peaks. The troughs. The dark. The light. The stories that unfold. His DJ sets are comprised with nothing but new unreleased d&b either by his peers or his own latest excursions. Most of which won’t be released for years. Or at all. Beyond releases and performances, Joe is an integral figure within the drum & bass scene as co-owner of Soul In Motion, paying tribute to drum & bass and its underground culture. His vision and aesthetic can be found coded deep in all Soul In Motion operations: its imagery, visuals, line-ups, unique locations and the label which, naturally, deals in music strictly for the club. Expect nothing less.

Alongside the don himself, we have a support lineup spanning the new and old school, so you can expect to hear all eras of DnB, from Hound's minimal productions through to soulful classics spun with finesse by Frederick Crew. Opening up proceedings, we have SorchaLula and Threshold, both known for their diverse jungle-based styles, who will be warming up the dance in fine fashion. Young Gho$t will add salt and pepper where needed, which with a lineup of this calibre won't be too much. Tickets are available from $30 - step into silly season and get yours now to lock in for a huge night of drum n bass the weekend before Christmas.