Night Under The Dome 2022 - Auckland Museum 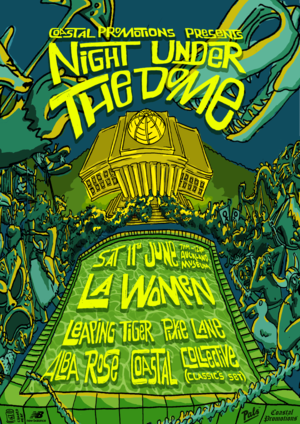 Night Under The Dome is a premium music function held in the “Under The Dome” space on top of the Auckland Museum. This is a unique concept based event, featuring some of Aotearoa’s best musicians in one of the countries most historic buildings.

Headlined by breakout indie-pop trio LA Women, join us in this breathtaking 360’ dome with panoramic views of the entire city. This event caters for all tastes, with a magical mix of indie-pop, house music, singer/songwriter and alternative electronic.

Centred around an all-inclusive and diverse ethos, our aim is to create an environment that welcomes people from all walks of life.

We can’t wait to host you at one of the most unique event experiences within the New Zealand live music scene.

Under The Dome
Auckland Museum

This is an open, all-inclusive party for people from all walks of life. We are fully committed to creating a safe space for everyone and anyone who wants to have a good time and enjoy some live music. Harassment of any kind will not be tolerated.

Thanks to our sponsors at Pal’s & New Balance

LA Women bio:
Auckland based indie-pop trio LA WOMEN are a band formed through brotherhood. Frontman Jake Schdroski and drummer Zac Emerson are cousins who began playing music together from the age of 7. Growing up in small community Wairarapa, they met bass/multi-instrumentalist player Jesse Brown in primary school, who quickly became family and the vital missing puzzle piece in completing their project.

Coming of age in small towns at the bottom of the world, an online upbringing allowed LA WOMEN to shape themselves musically. Soon they would become a genre nonconforming product of the internet, drawing from limitless influences including alternative rock, R&B, funk, hip hop and pop.

2018 saw the release of LA WOMEN’s debut EP, earning them co-signs with tastemakers like Complex and achieving over five million streams on standout single ‘Hurricane Love’. In the years since, LA WOMEN have taken a more organic approach to their artistry. The trio have shared a string of independent singles set to appear on their forthcoming sophomore EP, including ‘Under Pressure’, ‘Novocaine’ and ‘Love Me’; each respective single release supported with a secret underground party.

With every gig taking place in intriguing unconventional settings including garages, gardens and flats, LA WOMEN are steadily building a boys-next-door allure in their own backyard while their sights stay set on the world.