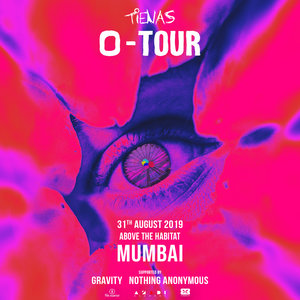 Azadi Records is proud to present Tienas' 'O' tour. The second city on his multi-city will be hometown Bombay on Saturday, 31st August! He will be supported by Mo Styles on the deck, along with Nothing Anonymous and Gravity.
_

Tienas
The Mumbai-based MC Tanmay Saxena, known popularly as Tienas or Bobby Boucher, is a breath of fresh air in the city's hip-hop community - bringing to the forefront a Nujabes-inspired sonic aesthetic that hasn't been seen before in a region dominated by 'gully rap'. His debut album 'O' is a 13-track journey with Tienas' thoughts as a musician and composer, sifting through rap with influnces rooted in RnB and rock music.

The name ‘Tienas’ is a wordplay on his initials “T n’ S,” much inspired by his idol and inspiration, Eminem who also used his initials “M n’ M” which stand for Marshall Mathers.
Tienas' ability to craft together complex narratives on fluctuating, chaotic beats has seen him enter multiple critics' list. Look out for his debut mixtape and full-length releases later this year.

Nothing Anonymous
An electronic duo featuring Nirmit and Ambika, who produce sounds in a style that incorporates broken beats and vocal melodies that stay with you.

Gravity
Gravity a.k.a Akshay Jagdish Poojary is co-founder and one part of rap crew Bombay Lokal.

Shout out to Budweiser, Ticket Fairy India for the support. See you Bombay!