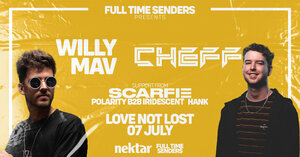 -- WILLY MAV --
A man that needs little introduction.
Willy Mav, aka, Willy Harman is a must watch artist within the drum and bass scene. Hailing from New Zealand, he started producing from his bedroom at the age of 13 and found his passion for Drum and Bass in 2017 after hearing it consistently at house parties, clubs and festivals. Fast forward 3 years, he’s gone from strength to strength from huge releases to supporting some of the worlds biggest names in drum and bass.
The numerous acts he’s supported showcases his versatility on stage as a performer, which directly translates to his production skills. Names such as Skeptical, Bcee, Bou, LSB, 1991, Document One, K-motionz and Monty to name a few.

CHEFF has been cooking up Drum & Bass in Auckland City since the entrees came out. One of the brightest up and comers in the New Zealand scene, CHEFF showcases his vast knowledge of production techniques and intricate sounds design in his tracks.

His unique, heavy soundscapes, coupled with his impressive music collection has landed him slots supporting some of the biggest and best in the international scene, including Artificial Intellegence, K Motionz, Brookes Brothers, DJ Phantasy, Sub Zero & more, as well as shows with local legends of the game such as Lee Mvtthews and State of Mind, and slots on the countries biggest festivals in Rhythm and Vines & Northern Bass.

With CHEFF’s releases amassing over 100,000 streams on Spotify, and plenty more releases to come, who knows what the CHEFF will cook up next?

Free glass hire with every drink purchase
TLDR;
WHEN: Thurs June 7th - 22:00 - 03:00
WHERE: Love Not Lost, 24 Allen Street
HOW: Limited tickets available on Ticketfairy.
WHY: That's the question we must all ask ourselves.
TopInfluencers