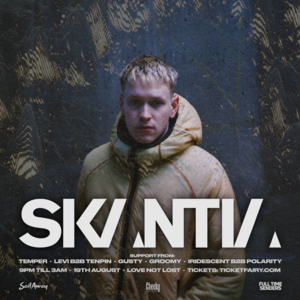 Iridescent b2b Polarity
Skantia (UK)
Making his way into Drum & Bass in true tried and tested, earn your stripes fashion – selling tickets for his local night back in 2015 – to being signed to RAM, Charlie aka skantia’s story is one of pure graft and hard work.
After becoming resident DJ at the same night he was promoting, it was during this time Charlie knew he wanted to step it up a gear by learning the art of production. Seven years down the production rabbit hole he’s now one of Drum & Bass’ brightest emerging talents: With releases on some of the most legendary labels in the game and the biggest DJ’s in the scene supporting & playing his music.
With inspirations ranging from the likes of Camo & Krooked to Bicep, plus his friends and crew in his hometown of Newcastle.
Drinks Specials for your special evening: