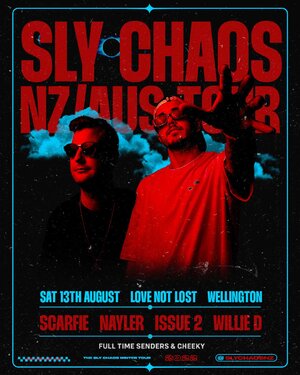 Hailing from Auckland, NZ. Sly Chaos is a Drum & bass duo with Conor Till & Michael Enderby.

The two have started to make quite the name for themselves, quickly rising through the ranks. They have had
the opportunity to play alongside some of the biggest names in drum and bass and they have worked with a
huge number of promoters around New Zealand, building up quite an impressive resume. They’ve supported some of the biggest artist in the game such as Andy C, Friction, Pendulum, Wilkinson, The Upbeats, AMC, Black Sun Empire and Hybrid Minds - just to name a few.

After tearing up the cellar stage at Rhythm & Vines, the lads have kept the plates spinning straight into 2019.
They recently dived head first into the world of promoting, starting with some of the biggest in the game
(Friction, Kanine & K Motionz) Fast forward a few months and the boys have landed themselves two weekly residency shows on New Zealand's biggest electronic music station -
George FM every Wednesday and Friday.

It’s 2022 and the lads are showing no signs of slowing down. Since releasing their debut track 22 months ago, they’ve dropped 15 tunes with 7 of them being in the NZ top 20 charts. They also have countless tracks and collaborations in the works, multiple tours on the way and have plans to cross over the ditch mid year! Let’s just say this year will be their biggest yet.

Tickets available on Ticketfairy from 5pm with limited early birds.

Drinks Specials for your special evening:
🍹 2 for $20 Jager or Vodka Red Bulls.
🌊 Milk if you really really want it.
🍷 $8 Cheeky Iced Tea or two for $15
🥤 Free glass hire with every drink purchase