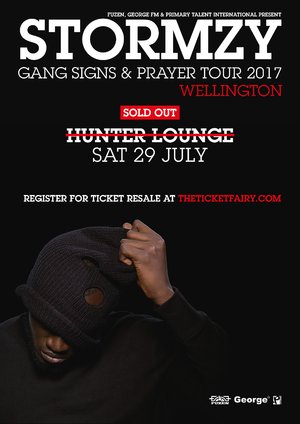 Register on the waiting list for any ticket resales

Following a huge response to his worldwide Gang Signs & Prayer album tour, Fuzen is proud to announce STORMZY will be making his highly anticipated New Zealand debut, with headline shows in Auckland and Wellington.

23-year-old Michael Omari, better known as STORMZY emerged onto the grime scene in 2013, appearing on his record-breaking YouTube freestyles series WickedSkengMan. Shut Up has so far clocked over 55 million views, the most watched freestyle on YouTube - ever.

Accolades came thick and fast - with STORMZY collecting Best Male Act & Best Grime Act at the UK MOBO Awards and Best International Artist at the BET Awards. His debut EP Dreamers Disease caught the attention of legendary British TV presenter Jools Holland who invited him as a guest on Later! making him the first unsigned rapper to appear on the show.

His hugely anticipated 2017 debut LP, Gang Signs & Prayerr, featuring the hit singles “Big For Your Boots” and “Shut Up”, has achieved worldwide acclaim, being the first grime album to ever reach number one on the Album Charts, and all 16 tracks featured on the Spotify Top 50 in just 72 hours after its release.

This event is R18