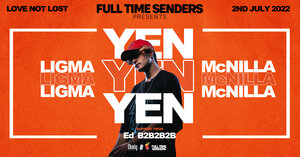 Yen has truly cemented himself as one of the most exciting producing and DJ talents in New Zealand since making his debut in 2020. His rise has been truly remarkable and stems from the high energy that he pours into his performances and DJ sets. In 2021, he made his debut release ‘Target’ on the UK label Kojiki Records, showcasing his slick production skills to the world.

Since then, Yen has been sitting on a mountain of dubs and has been working with producers such as Gray to hone his sound. This has earned him support from the likes of Dutta, Kelvin 373, Selecta J-Man, Crossy, Bish, Aries and many many more. His growing reputation has seen him play alongside the likes of 1991, K Motionz, Enei, Jakes, Pola & Bryson, Upgrade, Ac13, the Born on Road crew, Terrence & Phillip, Dutta and Document One (to name a few..).

Yen’s big show mentality has also seen him play at some of New Zealand’s biggest shows to thousands of people, including Urban Jungle Festival and Rolling Meadows. As the young producer and DJ looks towards the rest of 2022 things are only lifting off as Yen prepares to showcase his brand new music and sound that he has been working on to electrify crowds in NZ and soon beyond…

-- SPECIAL GUESTS: LIGMA + MCNILLA
Two of Christchurch's resident weapons with an array of steaming hot shows under their belt will bring their trademark brands of chaos to the capital, with LIGMA returning after a huge special guest slot and MCNILLA making his debut. Each have an arsenal of huge shows and heavyweight mixes under their belts, meaning you can anticipate an out the gate energy level from when doors open right until close.
Set times:

Free glass hire with every drink purchase
TLDR;
WHEN: Sat July 2nd - 10:00 - 03:00
WHERE: Love Not Lost, 24 Allen Street
HOW: Limited tickets available on Ticketfairy.
WHY: That's the question we must all ask ourselves
TopInfluencers