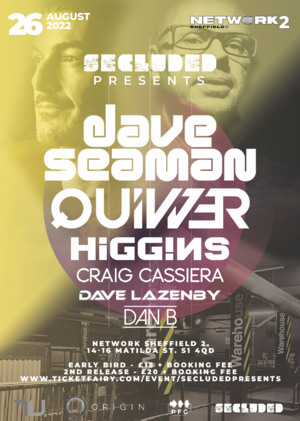 TopInfluencers
SECLUDED EVENTS PRESENT...
Sheffield are you all ready?

Dave is one of the original movers and shakers of the UK house movement. He has been DJing for over 25 years playing in over 80 countries around the world. He was the first editor of the clubbers bible, Mixmag, and has remixed and produced for everybody from New Order,Kylie,David Bowie and the Pet Shop Boys.

He has also done over 20 mix compilations for the likes of Global Underground, Renaissance & Radio 1's Essential Mix and also been the main man behind the independent dance music labels, Stress Records, Audio Therapy and now his new imprint, Selador Recordings. Quite simply, Dave Seaman is one of the legends of electronic house music.

Quivver
Iconic DJ and producer, John Graham aka Quivver is considered by many as one of the world’s finest electronic music producers. For over 25 years, the undisputed hitmaker has carved out a reputation as one of the world’s most versatile DJs, seeing him spend five years in DJ Mag’s Top 100 DJs list.


His love for all genres sees him continue to play across the board, with his DJ sets pivoting between house to techno, electro to breaks and Drum & Bass, under his other moniker, Skanna.

John Graham’s Quivver tunes are part of every top DJ's box and have been for some time for a long time; from the early days of Twist & Shout & Believe in Me, to Mumbo Jumbo, Takin Over and the monstrous I'm Bob, Quivver has, and continues to be, one of dance music's main attractions.

With even yet more classic releases under his other monikers Space Manoeuvres, Stoneproof and Tilt, Graham’s ‘Controlled Substance' imprint, is a test bed for Quivver’s darker, more experimental productions, including his critically acclaimed mix album, 'Rekonstruct', which scored number 1's in almost every Beatport genre chart.

With his new Long Player, ‘Relevate’ coming soon on John Digweed’s esteemed Bedrock imprint, plus a new global tour, this industry stalwart shows no sign of slowing down anytime soon.

He began his residency here in the steel city at the "The Edge" nightclub, playing alongside DJ's such as Mickey Finn, Grooverider, Swan E, Hype & SS.
Former resident for Upclose and personal MCR one of the UK’s leading club nights. Showcasing the best DJ’s from around the world in a intimate environment,

Favourite producers at the moment

Craig Cassiera is a DJ with over a decade's experience, and he's proud to say he's 'Made in Sheffield'.

initially making a name for himself in the Trance scene most notably as a resident for Gatecrasher during their AREA era, where his atmospheric & progressive selections made him ideal for warm-up duties.

Over the pandemic Craig gravitated more to the sounds of Progressive House & Melodic Techno and can now regularly be found spinning at Sheffield's acclaimed underground venues Hope Works & Network.

Born and bred in Sheffield, Dave Lazenby is well-known in the city’s club scene, a Passionate DJ that has well and truly rekindled his love for music over the past few years!

With a residency on Subcode – a global progressive house radio station and guested on other stations such as Mixpub – sharing the airwaves with the likes of Manu Riga and Robert Babicz Dave Lazenby is slowly up and coming!

Throughout this season, he is playing live across the country, but this summer with such a huge line up and representing his hometown,
SECLUDED presents will be the event of the Year!