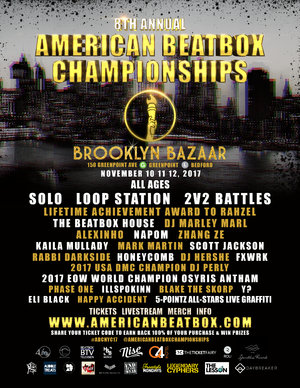 Looking ahead to it’s eighth year this November, the American Beatbox Championships has grown from a niche NYC-only event to over 64,000 livestreamers worldwide, 700+ attendees and millions of YouTube plays for 2016’s champs over two days at The Knitting Factory in Brooklyn, NY.

The 2017 American Beatbox Championships (#ABCNYC17) will take place at The Brooklyn Bazaar, a unique venue housed in the former Polonaise Terrace building, a historic banquet hall and ballroom in the heart of Greenpoint. This stylish three-story Brooklyn mainstay boasts a striking facade and an even more impressive interior with four distinct rooms filled with arcade games, karaoke rooms, ping pong tables, a restaurant, ice cream shop, and four separate bars. The vintage 15,000 square foot space is all ages, and will have areas both open to the public as well as exclusive access for our ticket holders throughout the three day event.