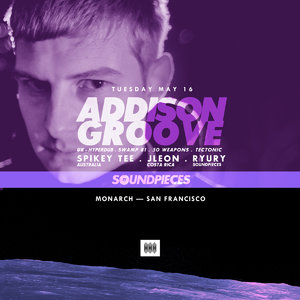 We are proud to present a slew of international acts with the return of ADDISON GROOVE at Soundpieces - Monarch!!

Get your Discount Tickets! http://www.ticketfly.com/event/1485013

ADDISON GROOVE (aka Antony Williams) started life under a different pseudonym altogether. Recording as Headhunter, with an LP and 12” releases on the influential Tempa label stretching back to 2007, he achieved legendary status within the dubstep scene. His work at the deeper end of the spectrum graced the label an impressive 7 times, a figure matched only by Skream. This work looked set to continue until 2010 when, seemingly out of nowhere, he crafted one of the biggest bass music tracks of the decade, ‘Footcrab’, under the new name of Addison Groove.

The response to ‘Footcrab’ was phenomenal, receiving critical and commercial success in equal measure across the dance music scene. Getting plays not only from the dubstep DJs that Williams was used to reaching, it also found its way into the record boxes of techno and house heavyweights such as Aphex Twin, Surgeon, Ricardo Villalobos and Mr Scruff, bringing an enormous new audience to his music in the process. Taking influences from the Chicago ghetto tek and juke scenes, Addison Groove’s impact on UK bass music has been colossal and unprecedented, sparking a huge interest in these styles from his peers and the listening public alike.

Progressing at a breakneck speed, he was quick to develop a live 808 show which has graced some of the finest nightclubs in the world including Fabric, London and Berlin’s infamous Berghain. With his hectic touring schedule including USA, Australia, New Zealand, Asia and numerous dates in Europe, he continues to bring his hybrid sound to captivated audiences across the globe.

SPIKEY TEE is one of London city's original 'rude boys'. He has been recording and spinning tunes for over 20 years. Having been a pioneer of the UK Hip Hop scene as one of the founding members of The Sindecut. He has watched Drum and Bass grow from its humble beginnings on London pirate radio, to the world wide phenomenon that it is today. Spikey Tee is now resident in Australia, but tours the world DJing and MCing

If you are looking for a track record then Spikey Tee definitely has one. He was first involved with reggae sound systems at the age of 13 acting as a surprise selector/operator in soundclashes in and around London. It was after singing at one of these clashes, he met DJ Fingers from London hip hop crew the Sindecut who are credited as pioneers of the UK hip hop scene and was asked to contribute to an idea for expanding the group. With a love of hip hop culture Spikey agreed, the band subsequently went on to sign for Virgin Records and released the acclaimed "Changing The Scenery" album in 1990.

After The Sindecut, Spikey joined Jah Wobble's Invaders Of The Heart and was lead vocalist for five years. As the group's front man he brought a real edge to their live performances, particularly when he sang The Abyssinians' Rasta anthem "Satta Massa Gana". Considering the quality stock from which he comes (Spikey is related to legend Bunny Wailer no less!), it was perhaps inevitable that he would so compellingly make the Rastafarian connection. Look no further than the emotive Invaders of the Heart single, "Mount Zion", for a sublime example of this particular string to his bow.

All the while Spikey continued to DJ in and around the UK, mixing hip-hop, R&B, ragga, and drum'n' bass. Not content to rest on his laurels, Spikey also made hit tunes for numerous producers, most notably with top-20 UK hit "Dark Heart", recorded for Bomb The Bass, and "Paper Soldier" for Mannasseh.

After a chance meeting with Dom (Blood and Fire Records/Sound System) and Mr Scruff at a Jah Wobble concert in Manchester, Spikey Tee teamed up with the Manchester hip-hop label Grand Central for a number of collaborations. A track with Mr. Scruff, "Is It Worth It", was received extremely well, as was "Erase The Pain" for Tony D's 'Pound for Pound' album, going on to tour with stablemate Aim as part of a 10 piece live outfit.

After striking up a relationship with Blood and Fire Records, he was included in the Sound System line up and performed around Europe with reggae legends such as Dennis Alcapone, Ranking Joe and Horace Andy. Spikey also appears on the Morcheeba album "Big Calm" and their live DVD From Brixton To Beijing, where his vocals feature on "Friction" and "Shoulder Holster". He can also be found on Mark Rae's debut solo LP, "Rae Road", on the final track "Throne" and also on Dual Control's Grand Central Records debut album "Left Or Right" performing "Burn It Out"..

His DJ-ing, MC-ing and singing skills have taken him around the world to Australia (where he now resides), Sweden, Czech Republic, Germany, Norway, Russia, and Finland to name a few. Spikey recently collaborated with New Zealand's Auckland based producer Andrew "Sola Rosa" Spraggon and recorded "Badman" for his 3rd album release "Moves On" and has been touring New Zealand as a vocalist with the band playing several festivals over the last 18 months. He is now back on vocal duties, writing and recording his first solo album and is hoping it will be released mid 08. His appearance on DJ Hype's Ganja label on a track "Hands Up" marked his first vocal drum 'n' bass outing. This lead to Spikey being introduced to Potential Bad Boy by DJ Hype, they immediately clicked and recorded Submission which was released as an AA sided single including another collaborative effort entitled "Show Me". You can also hear Spikeys inimitable vocal on True Playaz artist Crystal Clears "Blaze". Other releases include On The Rise and Rubadouble co-produced with New Zealands Agent Alvin. The first of these tracks has been remixed by Breaks DJ/Producer Timmi Schumacher and has received excellent reviews by numerous publications and is blowing up dance floors around the world.

Most recently there have been 2 more releases, one is another double a sided effort which is a collaboration with Sydney producer Ritual entitled "Bun Dem Down" and the flip being a DJ Suv remix of a track entitled "Zero Dub" released on Suv's Playsides label. The 2nd is another collaboration with a very talented producer from the Czech Republic by the name of Rido (pronounced Reedoo) entitled "Life Is Strange" released on Focuz Records.

Having completed a successful dj tour of America last year, There are plans for another trip to the states where he hopes to be travelling with Prime Mover. Always a man to keep himself busy, Later this year Spikey is looking to start production on his Soundclash video game for the Playstation

JLEON is a producer and Dj from Costa Rica. A fresh artist entering the bass scene and he has already been featured in blogs like RunTheTrap, To//Future, EDM.com and others. As a Sleeveless Records warrior, JLEON has begun numerous side projects and claims to not be genre specific. JLEON already has performed alongside artists such as Buku, Luminox, Antiserum, Alice Glass, and has had bookings at World Of Drum&Bass WMC Miami, Envision Festival with his drum & bass project, and Bamboo Festival.

This event was made possible by SOUNDPIECES

SOUNDPIECES has had its hands in organizing top notch events, making art, and weaving webs since 2006. Join us to discover the newest of musical formulas, hosted in the most ideal and sophisticated atmospheres we can find. We are not genre specific, we are quality specific. Soundpieces is famed for showcasing diverse high-end bass music and rare international acts including Diplo, Addison Groove, Aphrodite, Kode 9; and many for their very first time in the Bay Area such as Hudson Mohawke, Mount Kimbie, Rustie, Shlohmo, Nicola Cruz, Caspa, and Joker to name a few. We've been hosting the only diverse bass music "weekly" in San Francisco every Tuesday for over 4 years. With our expansion to LA, we are building within our community to develop one of west coast's premier sources to have top shelf experiences with quality electronic music.

THE VOID Acoustics Soundsystem
We are honored to be able to showcase Soundpieces on Monarch's custom horn-loaded Void Acoustics Sound System, the only one of its kind on the West Coast!!! When you descend to the club's dance floor you are immersed in a world of complete euphony generated by the venue's four protruding tuba-like enclosures. Without a dead spot in the room, it's easily the best place in the city to hear the biggest sound.