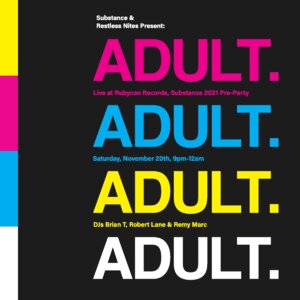 Restless Nites & Substance Presents a special in store live performance by ADULT. to celebrate the upcoming Substance 2021 festival the following week. This event will take place inside the new Rubycon Records record store in East Hollywood, and has an extremely limited capacity.

The event is invite only, but very few tickets have been made available to the public, so grab yours while you still can...

As Adult., husband-and-wife duo Adam Lee Miller and Nicola Kuperus channel the existential anxiety of the late 20th and early 21st centuries into music and visuals that are sometimes humorous, sometimes experimental, but are first and foremost dark.

With over 23 years working and a sprawling discography to show for that labor, Adam Lee Miller and Nicola Kuperushave spent their entire career as ADULT. obscuring any defined genre orstyle, writing and recording albums as art for life’s sake. On their latest album, the group are back at it with some discordant, doomdance sludge to mark their 9th studio album Becoming Undone.Written between November 2020 and April 2021, the album might be the bands most non-conformant yet. Sure there’s plenty of dance bangers, but ultimately the album is riddled with impermanence, loss and looping dissatisfactions.