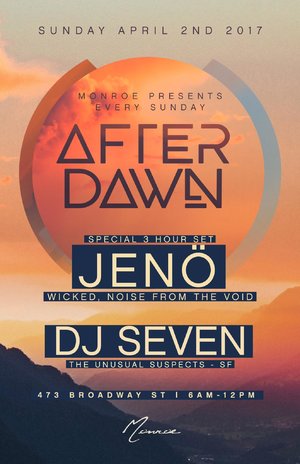 This Sunday we come back wit one of San Francisco's greatest talent : Jenö !
Opening Set by Dj Seven

>>> DJ Seven
https://soundcloud.com/dj-seven
DJ Seven (Sean Evans) was born in SF, raised in Marin and has been a DJ for 25 years. He started on CDs which had only been around for a few years (then later switched to vinyl, followed by digital Serato DJing).DJ Seven began his career playing parties and programming sets of 80s rock and nu wave: The Police, The Cure, U2 and New Order. Things shifted in college in San Diego with the onset of early hip hop: Beastie Boys, NWA, Too Short and RunDMC..followed by the Golden Age: A Tribe Callled Quest, EPMD, Nas, Biggie, Tupac, Dre, Snoop. The early 90s was a period of early hip hop, early rave and rock music.DJ Seven was honored in the mid-2000s by Nitevibe.com Reader's Poll as one of the Top 10 Dreamteam DJs two years in a row. Now, in his 40s, DJ Seven has slowed down a little and is older and wiser with regard to taking gigs. He still loves DJing and balances private parties/corporate events/mobile DJing with club/lounge/bar and underground afterhours bookings