Aliberto's Presents Stand Up Comedy In The White Mountains 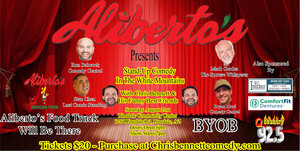 Aliberto's Presents Stand Up Comedy in The White Mountains with Chris Bennett (QCountry 925's The Morning Brew and Jimmy Kimmel Live) and his Best Friends on Saturday August 21st at 7pm.

Doors for the Event open at 6pm and show starts at 7pm.

This event is BYOB! Bring a cooler with your favorite delicious drinks!

Aliberto's Food Truck will be there serving food starting at 6pm!

Show is intended for mature audiences and will feature hilarious stand-up comedians that have been seen on ABC, NBC, FOX, and Comedy Central.

Line Up Is Subject To Change