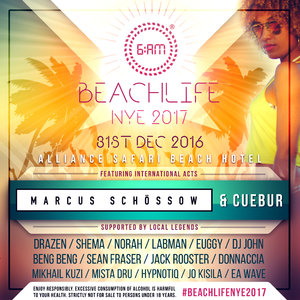 6:AM Entertainment has spent the past few months putting the final touches on their flagship event, BEACHLIFE NYE 2017! This is the one night of the year when we all come together to say goodbye to the year that was, and hello to the New Year, with the sand between our toes, 6:AM style ;). The ultimate event of this year is almost here!

Get ready for the time of your life this New Year’s Eve! 6:AM Entertainment will be descending on the beautiful sun-kissed beaches of Kenya’s South Coast for what will be their biggest event to date! BEACHLIFE NYE 2017 is here! We are back at the ALLIANCE SAFARI BEACH HOTEL in Diani Beach where it will play host to this enormous gathering of ravers and party people with some of the most mind-blowing acts to ever grace the Kenyan stage.

We are proud to announce 2 massive international acts this year! The maestro Marcus Schossow will be making his debut on Kenyan shores alongside one of the finest South African acts Cuebur! The legendary International acts will be supported by the hottest DJs in East Africa, across two insanely large stages, with a thumping sound system to match. This is going to be the party of the year! Be sure to keep your eyes peeled for more information.

Marcus Schossow, a pioneer name in electronic music, has been rightfully dubbed "The New Face of House Music". Marcus maintains a thriving buzz throughout the electronic music scene due to his consistent releases on major labels such as Size Records, Axtone, Revealed, Big Beat (Atlantic Records), and Spinnin Records’. Recently, Marcus premiered all of his new music for 2015 as a guest mix on Steve Angello’s radio show residency on BBC Radio 1, which has over 2 million listeners. His latest single “Lionheart”, on Armada has received over 5 million streams resulting in becoming a world wide electronic radio hit. With an impressive list of collaborations including Charli XCX, Coldplay, Icona Pop, Axwell, Lana Del Rey , and more fourthcoming music, Marcus had an explosive 2014 doing over 100 shows around the world. Be on the look out for Marcus as he tours the world in 2015 and strategically stops at the highest profile venues and festivals.

It is not often that the story of a highly regarded music producer starts with a nerdy 15-year-old that is obsessed with hip-hop. This, however, is how the story starts for the talented Cuebur. As a young teen growing up in Mpumalanga, Nicholas Mboweni now known as Cuebur was passionate about computer studies, hip-hop and beat boxing. Never did it cross his mind that one day he would be a successful international House music producer. He also never expected to release his own successful albums, be signed to a local and international label, produce collaborations with Grammy nominated artists, see his songs top radio charts or perform on big stages with big names. After receiving his first PC, Cuebur’s House revelation began. As the only kid in the neighbourhood with a PC, Cuebur was the one-stop shop for all digital requirements. One of his friends, DJ Xola, would often visit him with his own equipment and vinyls to record mixes. Leaving this equipment behind, Cuebur was swiftly enticed to try his hand out at what it takes to produce his own songs.

Always returning with the latest music, Xola played Cuebur a song that would completely sway him into the House direction – Kerri Chandler feat. Monique Bingham – ‘In The Morning’. From this moment on, Cuebur started producing his own tracks under the watchful eye of Xola, who offered continuous suggestions on how to create these sounds. His first release, which started to gain popularity and airplay, was his track ‘Pepe’. This release got the attention of DJ Shimza and several other big names in the industry. After successfully completing school, Cuebur moved up to Johannesburg. In the City of Gold, success started to build up for this young man. He was also approached to include ‘Pepe’ on DJ Zinhle’s compilation album. Having his own track featured on an album really served as inspiration for Cuebur to start pursuing this hobby as a profession. With a newly sparked ambition, Cuebur was awarded a bursary to study music production through the Soul Candi Institute of Music.

His favourite parts of the course included music theory and music business, which really expanded his skill set. While a student at SCIM, Cuebur entered a competition where the student who produced the best track would be featured on the “Soul Candi Sessions” album. Needless to say, this is where Cuebur got his big break and his song ‘Walk a Mile’ was featured on this highly regarded album. With this great accomplishment also came the honour of being named the SCIM Student of the Year for 2010. As a graduate of SCIM, it was also a great honour for him to be recently named the school’s official ambassador. His own releases quickly followed with his debut album being launched in December 2010. Cuebur had his own disc included in the 3-disc compilation album, “Candi Roots Vol. 1”, alongside DJ Mphoza and DJ Hypnosis. His second album to be released was “Awakened Spirit”, which was followed by “For Headz Only”. “For Headz Only” was released locally through Soul Candi in 2013, and was then released globally through Defected/Soul Heaven in 2014.

The album took Cuebur only 2 months to put together and features collaborations with artists like Thandi Draai, Marissa Guzman and the Grammy nominated Vikter Duplaix. Cuebur’s production sound is an ever-evolving one, which can be described as a soulful Afro-Beat with a techno style that features a strong tribal flavour. He is influenced by artists like Atjazz, Osunlade and Rocco, and is always keeping a close eye on industry trends. Besides these influences, Cuebur is a firm believer in pushing boundaries and developing exciting combinations of styles. One such experiment is his newest EP released in August 2014 – this Floor EP takes house to a place it has never been before – combining Cuebur’s deep tribal sound with a dubstep beat. He is taking local house and fusing it with an international sound that is sure to transform the dance scene, as we know it. Besides his newest Floor EP, Cuebur has also worked very closely with his good friend, Andyboi on the production of his album “Trail Evolution”, which was launched in June 2014. Adding to this, Cuebur has his own disc on “Soul Candi Sessions 2015”, which was nominated at the 21st Annual South African Music Awards for Best Dance Album. “Soul Candi Sessions” is Soul Candi’s flagship album, which highlights the hottest artists of the moment.

Cuebur has made a number of appearances which include being a guest mentor and judge for SABC 1’s reality TV show “1’s and 2’s” and having performed at events like Ultra South Africa, Spring Fiesta, Oppikoppi, CTEMF, Raise The Roof, SAMA After Party. He has also performed at international venues like, Djoon in Paris and Nomad in London, as well as Lookal in Angola. It is clear to see that Cuebur’s unique talents are in high demand. His future in the music scene is one that represents an A-grade artist with international prospects, and the fans should expect nothing less than the most forward-thinking and high-quality productions.