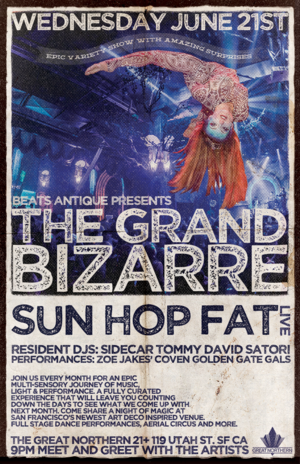 Join us every month on an epic multi-sensory journey of music, light, and performance. A fully curated experience that will leave you counting down the days to see what we come up with next month. Come share a night of magic at San Francisco’s newest art deco inspired venue. Full stage dance performances, aerial circus and more.

Meet and great with the bands and performers 9pm to 10pm


Beats Antique:
The styles combined to create Beats Antique’s sound are a union of old and new inspirations. There are infusions of Middle Eastern belly dance music, down tempo, hip-hop, old school jazz, clown, afro-beat, and many styles of electronic music. The musicians have been influenced by their diverse musical backgrounds. They incorporate many live instruments to produce their style of music.

For years Sun Hop Fat has been at the forefront of introducing the unique sounds of Ethiopian Jazz to the masses. The music blends the rhythms of traditional American funk (James Brown, Parliament) and jazz (Yusef Lateef, Miles Davis) with harmonies and melodies from East Africa. The result is an up-tempo groove machine that borrows harmonies from the Middle East. The music focuses primarily on arrangements from the “golden era” of Ethiopian Jazz but includes original compositions as well. This all-star band includes standout musicians from other popular San Francisco Bay Area groups. Sun Hop Fat has developed a solid following throughout Northern California by playing a number of clubs and festivals. The ability of the band to captivate sit down jazz crowds as well as steal the spotlight in prime festival slots, encouraging crowds to get up and dance, makes the group flexible in its appeal and garners support from diverse audiences.

San Francisco’s new nightlife darlings THE GOLDEN GATE DOLLS are a collective of the Bay Area’s best and brightest variety performers. Coming from the rich underground circus culture of San Francisco, the Dolls have gone on to create world class award winning acts that have been seen across the globe. Although they perform internationally the Dolls have a fierce pride in their city, and love calling San Francisco home. You may have seen them spinning in San Francisco’s hottest nightclub Monarch, or at one of the cities many tech company parties. Whether seen on stage or at the bar, these lovely ladies are sure to keep your heart in San Francisco.

COVEN is Zoe Jakes dance studio in Berkeley. an array of dance classes, featuring Tribal Fusion, Odissi, hot pot ITS, and much more!

Air Bené, also known as Bené Rather-Taylor, has been painting faces and bodies since 2011. Her artwork has appeared at countless events, including Super Bowl 50, Lucasfilm holiday parties, and the exclusive SF Battery Club's New Years Eve celebration. She has travelled internationally to study with the acclaimed body artist Alex Hansen, and attended the World Body Painting Festival in Austria in 2013. She enjoys nothing more than transforming people into living pieces of art. The possibilities are endless, what will you choose to be?