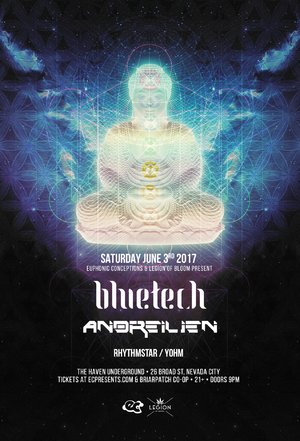 Bluetech is a Psybient DJ/producer who creates a varied selection of downtempo music. Bluetech's music is very diverse, even for a psybient artist. He places significant emphasis on melody in his productions, and his works often demonstrate an influence from Dub and Ambient Techno. Although Bluetech's music includes some "organic" samples, it is created mostly using digital synthesizers and production software, giving a very "Digital" quality to it, much like the Glitch inspired sounds of Shulman, who has also released albums through Aleph Zero Records.

Andrei Olenev first emerged on the San Francisco underground glitch/bass scene in 2006 performing under the moniker, “Heyoka.” By 2009 he was touring extensively, and quickly became a staple sound in the rapidly growing bass music scene of North America. He has since gained international recognition and established himself as a pioneer of psychedelic bass music. Andreilien has a constantly evolving sound with a solid foundation of deep sub bass and heavy psychedelia, combining influences of many musical styles, without confining itself to any particular genre. After launching Andreilien, he continued to develop his sound, culminating in the releases of “Dub Iteration” and “Antikythera.” Andrei has since taken a couple of years to evolve and reinvent his musical style, resulting in his new album, “Downloads from the Dub dimension,” in which he delves into different styles and sonic experimentation. Further expanding his repertoire, Andrei has been continually working to develop a multimedia project with original Visionary and 3D art to create full sensory fractal journey, which he plans on touring with in the future.

So, for a sonic journey so thick you can smell it, keep listening to signals from beyond from Andreilien…