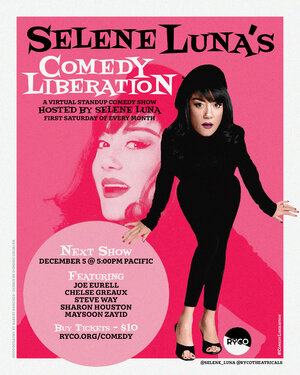 “[Luna is] a polished spitfire.” — THE NEW YORK TIMES

“[Luna] a walking ball of comic defiance, which is exactly what stand-up is supposed to be.” — LA WEEKLY

Selene Luna’s COMEDY LIBERATION is a virtual standup comedy show shining a spotlight on sharp-witted outspoken, bracingly hilarious comics. A one-of-a-kind evening of uncensored comedy featuring comics with disabilities and our friends who are not afraid to say what’s on their minds. The show will go live every first Saturday of the month at 5:00PM Pacific via Zoom. We are breaking down the stereotypes of people with disabilities one laugh at a time!