DJ SUV (Reprazent) on NYE by Driven AM 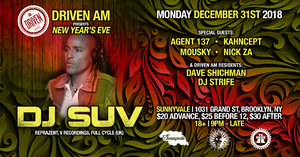 Driven AM brings in the New Year with a Drum and Bass legend!!!!!

With a career spanning over 25 years, from a Mercury Music Prize recipient to earning a Mobo Award, DJ SUV’s career and contribution to Jungle/Drum & Bass culture speaks for itself.
A crucial member of the respected “Reprazent” & “Full Cycle” Groups.

Early in his career DJ SUV was a founding member of the seminal 1989 group “Fresh Four” – who burst onto the scene with the foundation track ‘Wishing On A Star’ which peaked at #10 on the UK Singles Chart & #22 on the Irish Singles Chart. A founding member of the Mercury Music Prize winning group - “Reprazent” aka “Roni Size Reprazent” their debut album “New Forms” won the Mercury Prize in 1997 and went five times platinum. Their follow-up album In the Møde featured artists including Rahzel, Zack de la Rocha of Rage Against the Machine and Method Man. Reprazent's music has been described as containing “meticulously crafted break-beats that, when slowed down, revealed themselves as hip-hop beats”.[2] The most popular track, “Brown Paper Bag”, was praised in the Guardian as a “masterpiece: an essay in hyperkinetic pace, it piles up teetering stacks of instrumental layers, their cumulative weight triggering each step in a constant cycle of demolition and reconstruction of its latticework of melody, rhythm and mood". The singles from New Forms featured the vocals of Onallee, whose call for the music in "Brown Paper Bag" is a signal that became widespread in rave culture. DJ SUV has undoubtedly contributed his fair share to the development of the British underground music culture and definitely to the sound of Bristol cementing his name in music history books as one of the forward-thinking pioneers. His work within different time signatures, particularly evident within the Free Beat EP for Full Cycle, brought an abstract feel to his sound that was not deliberately awkward, but more a reaction against a perceived militancy in drum'n'bass production. Fast forward to 2018 and DJ SUV is traveling the globe playing festivals & club nights while releasing music on a variety of labels including powerhouses like V Recordings, & Natty Dub, as well as his own Playside Records & Playside 175 based in the USA which he co-runs.

About DRIVEN AM: Established in 2006, Driven AM is a Drum and Bass record label, artist manager and live event coordinator based in NYC. Join us every month at Sunnyvale for amazing music in an inclusive environment with positive vibes.