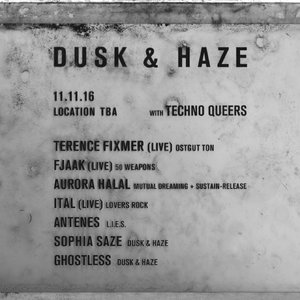 Following up on our first DISTAL rave this past April, Dusk & Haze is back this Friday, November 11, for another installment for our 2 year anniversary, in collaboration with Techno Queers NY. Berghain's Terence Fixmer, FJAAK, Aurora Halal, Ital, Antenes, and Dusk & Haze’s own Sophia Saze & Ghostless will command the dance floor Friday night through Saturday morning. A roaring 4-point D&B sound system will accompany our visual production, led by artist Kyle Hopkins. Our expansive warehouse will be partitioned into interactive sonic and visual experiences, including mixed media art installations interlaced with unique lighting and live performers. We'll again feature our special house cocktail plus copious supplies of Club-Mate USA. Clothing is optional. Location will be announced day of the event.

Terence Fixmer has been a persistent force in Techno since the release of his debut album Muscle Machine on DJ Hell’s pivotal International Deejay Gigolo Records in 1999. Hailing from France, the prolific producer-DJ has consistently explored and expanded on what defines modern techno, with releases on labels such as Electric Deluxe, Prologue, CLR, Deeply Rooted, and his own imprint, Planete Rouge. With the addition of his most recent EP Beneath The Skin (Ostgut Ton), described by Resident Advisor as what may be “this year’s quintessential Klubnacht record,” Fixmer’s stylistic range has consistently diversified over the last two decades around the elements of Dub, TBM, and Gothic sounds.

Making their New York debut, Berlin-based trio FJAAK has been releasing and performing their own brand of classic techno, house, and breakbeat since 2009. With releases on City Slang France, Klasse Recordings, and most recently, Modeselektor’s 50Weapons, FJAAK has been breaking ground throughout Europe with both their energetic live sets and their hardware / vinyl-only party series, Machine Vibes. Since signing to 50Weapons in 2014, the group has released five EP’s, with their most recent, Super Smash / Oblivion, being a split release with Dystopian label-head, Rødhåd.

Serving as one half of the creative team behind the lauded Sustain-Release weekender in upstate New York and the head of NYC-based party series Mutual Dreaming, Aurora Halal is a driving force behind Brooklyn’s burgeoning and enigmatic techno scene. With releases on Confused House, BAKK, Lovers Rock, Minimal Wave, and her own Mutual Dreaming label, Halal's hardware inspired techno comfortably reflects the borough where she’s made her bones.

Ital is another local fixture who has released his personal variations of techno and house on labels 100% Silk, Planet Mu, and his own Lovers Rock imprint (featured as Resident Advisor's album of the month in July). With a sound built in part by his DC-hardcore roots, Ital's recordings and live show are a perfect example of Brooklyn's underground techno scene, inflicted with the memories of post-punk, psychedelic rock , and hardcore.

Brooklyn-based artist Antenes operates a laboratory of self made sequencers and modular synthesizers built in the name of rhythmic, sonic, and spatial exploration. Making her debut release on Ron Morelli’s L.I.E.S. imprint in 2015, she has quickly built a reputation as a talented and unconventional producer/DJ. Her driving DJ sets construct shadowy soundscapes of dark acid-tinged techno and shimmering electro, mesmerizing dance floors in a psychedelic world of odd percussions.

Sophia Saze is a musician and a multi-media artist based in Brooklyn, New York. Her imaginative journey began in her hometown Tbilisi, Georgia. She's the founder of Dusk & Haze. Infatuated by classical music and dance during childhood, she ultimately found herself immersed in electronic music and currently focused on a live techno act.

Also representing Dusk & Haze is Ghostless, the musical project of Richard San Luis. The Ghostless moniker started as a psych noise band in 2007 and evolved into a more industrial techno sound. His DJ sets are reflective of his energetic, yet visceral productions.