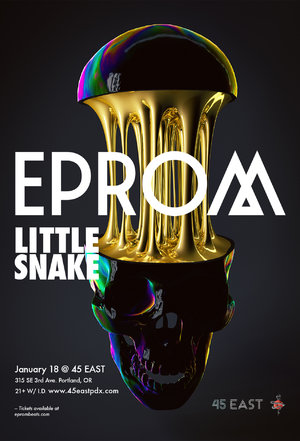 Eprom has turned more than a few heads in his climb to the top of the bass music world. Eprom is one of the vibrant West-Coast scene's most colorful characters, with an unmistakable sound and an unforgettable stage presence. His unique sound varies from toxic hip-hop to searing garage mutations to bizarre concoctions somewhere in between. the champions of the underground. This success has not gone unnoticed, either. Fans and supporters of Eprom include Flying Lotus, ?uestlove, DJ Shadow, Diplo, Bassnectar, Craze, Rustie, and The Glitch Mob. In addition, Billboard recently announced Eprom as Billboard Dance's Ones to Watch for July 2018. Eprom’s new project, “In Praise of Darkness”, a collaboration between Alix Perez and Eprom as “Shades” has been well worth the four-year wait. It’s a work that seems to combine nearly incompatible bass sounds, creating a journey through the album that will both surprise and astound you. It’s a mix of experimental sound design, crazy percussion and unpredictable switch-ups that characterize the entire album. Eprom has just begun his takeover of the underground world while causing a terror on the West-Coast beats scene. It is this undisputed musical mastery that makes Eprom an artist to keep an eye on in the future.

“Eprom earns ears and respect with deconstructed bass beats that shake the ground as they rip through the time-space continuum… It's only the beginning for this brain-busting beast, and we're calling it.” https://www.youredm.com/2018/07/16/alix-perez-eprom-team-up-as-shades-on-their-debut-albu m/

“What happens when two of the most forward-thinking producers from bass music get together in a studio and create an album? You get In Praise Of Darkness from Shades , the collaborative project between Alix Perez and EPROM .” “Experimental sound design, crazy percussion and unpredictable switch ups characterize this entire album. And it’s all done within an idea of musical perfection.” “Certain tracks are certainly worthy of being called singles.. but even those become more other-worldly when experienced as part of the full package.”

“He's caused terror in the West Coast beats scene.” “He's remixing drum & bass anthems while blending his own original productions into a set that will fuck your bassbin up if you aren't ready.”