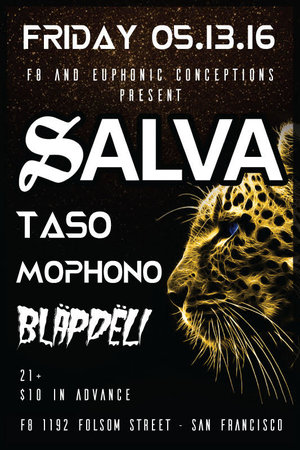 A very special & intimate bay area performance from the one and only SALVA. A versatile solo producer, crowd riling DJ, owner of the revered Frite Nite label and key Figure in the Friends of Friends collective, Paul Salva knows how to control a room. After dropping one of 2012’s biggest tracks, a collaborative remix of Kanye West’s “Mercy” that not only reached #1 on Soundcloud, but received spins on Power 106 FM (LA), Power 105 FM (NYC), and Shade45XM, Salva’s work promotes complexity through a synthesis of contrasting styles, showcasing dips into house motifs, grooves in smooth boogie funk, and massive roiling bass waves that has garnered support from the likes of Pitchfork, FADER, FACT, BBC’s Benji B and Skream & Benga, A Trak, Low End Theory, Snoop Dogg, Diplo, Dâm-Funk, Night Slugs, and many others.

A Chicago native who developed his craft in San Francisco and currently resides in Los Angeles, Salva has been invited to perform on the world’s biggest stages. A 2011 alum of the Red Bull Music Academy, 2012 has seen Salva perform at Sonar, Coachella, Lollapalooza, Mutek Montreal, Detroit Electronic Music Festival, SXSW, The Do Over LA, Boiler Room, Low End Theory, and many others, while touring alongside Nguzunguzu, Shlohmo, Pearson Sound, and B2Bs with Machinedrum.

Aside from his live performances, Salva hones his production talents as one of the cornerstones of the Friends of Friends label alongside Shlohmo, Mexicans With Guns and Groundislava. His 2011 debut full-length, ‘Complex Housing’ and ‘Yellobone’ EP both received critical acclaim (Pitchfork, FADER, FACT, and others), leading him to exclusive mixes for Mary Anne Hobbs, The FADER, and XLR8R, while being asked to remix the likes of Miguel Migs, Glitch Mob, Rainbow Arabia, Om Unit and others.