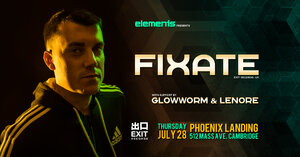 Declan Curran, aka Fixate, comes from a generation that isn't locked to the notion genre, he is product of UK musical innovation with his sound pallet & productions traversing styles such as drum & bass, jungle, dubstep and grime.

He is a flagship artist for dBridge’s hugely respected, taste-making label Exit Records with his various EP’s, two LPs plus work as part of dnb supergroup ‘Richie Brains’ garnering praise from critics and fans alike, and cementing his reputation as one of the most exciting young talents in UK bass music today. July 28th he touches down in Boston in support of his self-titled LP that's been electrfying dancefloors this summer! Don't miss it. Opening set by Lenore x Glowworm.