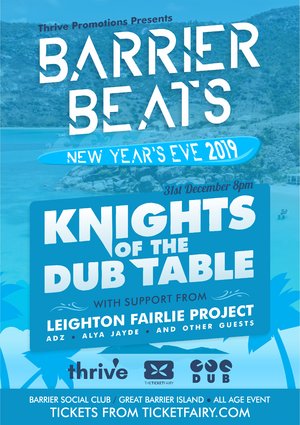 We're back and this year we're taking over your New years Great Barrier! Earlier this year we showed you the kind of production we can bring to a small Island but yet you still won't believe your eyes when you see what we have planned for this New Years! Prepare yourself for the best New Years yet!

Doors will open from 7pm with music starting at 9pm!

In the last 4 years Knights of the DUB Table have released 3 E.Ps being Dedication, Unity and Brotherhood. Compiling these E.Ps into one Album called D.U.B (Dedication, Unity, Brotherhood). Later in 2019 they plan to tour throughout New Zealand, Australia and Bail over 2020 summer.

Over the past 10 years they've played at festivals such as Fritter Festival, Caloundra Music Festival (AUS), New Zealand Harvest Festival, Northern Bass and headlined Australia's Wallaby Creek Festival in 2018 plus many more.
TopInfluencers