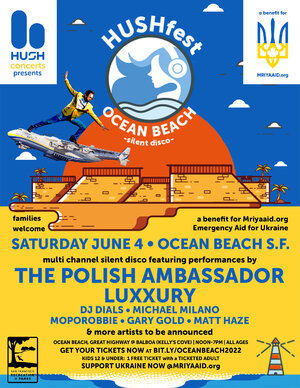 TopInfluencers
HUSHconcerts presents the long awaited return of its beloved

a Benefit for Ukraine via MriyaAid.org
featuring 2 channels of music on HUSHconcerts exclusive HUSHglow headphones featuring:

Children under 12 free, as long as accompanied by a ticketed adult.

____________
On Saturday, June 4, HUSHconcerts proudly presents the return of our incredible community event HUSHfest Ocean Beach, this time benefitting a crucial cause, direct aid for Ukraine. 100% of the event's profit after expenses will be donated to MriyaAid.org, an NGO that provides direct nonlethal aid to Ukrainians on the front lines as well as support for Ukraine’s internally displaced persons (IDPs). To support this amazing cause, HUSH has assembled its biggest Ocean Beach lineup ever, headlined by an extended closing set by Northern California electronic producer THE POLISH AMBASSADOR and disco remix superstar LUXXURY. They will be joined by DJ DIALS, MOTION POTION, MICHAEL MILANO, DJ MATT HAZE, GARY GOLD and more TBA. Dance with your feet in the surf on two channels of music to pristine audio beamed across the sand to HUSHconcerts custom HUSHglow headphones.  Get tickets now and learn more about the cause at www.HUSHconcerts.com

For years, HUSHconcerts (and before it, SunsetSF) has done its best to use what little power we have as an event producer to help those in need. From our support of New Orleans musicians affected by Hurricane Katrina, to our work on behalf of those displaced by California fires, to our Music4Masks campaigns in 2020, we have embraced the motto 'if you can't make a a buck, make a DIFFERENCE.' Today we are making our most forceful stand in support of the brave people of Ukraine as they fight to protect their homes and families from Russia's brutal, illegal, and unprovoked invasion.

To that end, we are donating 100% of the net proceeds of HUSHfest Ocean Beach on June 4 to Mriya Aid, a Canadian NGO that provides direct nonlethal aid to the Ukrainian effort. We have assembled our best Ocean Beach lineup yet, headlined by Polish Ambassador and Luxxury, and will be livestreaming the show direct to Ukraine so that folks over there can feel the love.  All that you knew, but a very good question we have been asked is WHY? Why THIS cause? Why Ukraine? Why MriyaAid.org specifically. For those questions and a few others,here is an FAQ.


WHY IS HUSHconcerts TAKING THIS PARTICULAR STAND?

We who produce music & events in this beautiful place are among the most fortunate humans to have ever lived. We enjoy freedom, security, and ‘certain inalienable rights’ because of our Constitution, the luck of distance from potential enemies, and robust armed forces that defend us. Other people around the world have no such good luck. The 44 million people of Ukraine has spent the past 10 years embracing democracy, fighting corruption,and embracing western values is now seeing those dreams threatened.

Russia’s unprovoked and illegal invasion of Ukraine has featured force, brutality, and inhumanity on a scale we have rarely seen. This sovereign nation has seen its infrastructure destroyed, houses leveled, schools, hospitals and theatres bombed, and its population massacred, tortured, and deported to faraway concentration camps. Watching this tragedy unfold has made us feel helpless to intervene or assist. Producing this concert, as insignificant as it may be in the grand scheme, is one thing that our little community has it in its power to make a difference. Supporting MryiaAid and raising awareness of the plight of Ukraine’s brave citizens, is the least we can do.

Russia has all the power here. All Russia needs to do to make peace is to GO HOME. Until they do so, Ukraine has every right to defend their soil, their citizens, their livelihoods and their lives. Supporting this fight to ensure that Ukraine wins this war is the only way to end it, and to spare millions from further suffering. But we are not a government, or an arms dealer, and can’t send bullets or bombs.

But we can aid this heroic resistance by sending non-lethal aid to the Ukrainians on the front lines, which is what MriyaAid.org does so well. This little independent NGO made up largely of Canadian ex-military and logistics experts sends the cargo that keeps Ukrainians on the front lines alive and in the fight: from Tourniquets and Medkits for EMTs to helmets, body armor and NVG’s for the troops. Their people on the ground in Ukraine also assist with in-country refugees, (Internal Displaced Persons / ‘IDP’s’).  MriyaAid is a 100% volunteer organization that is saving the lives of Ukrainians fighting for their freedom and we are proud to support such an excellent organization. Please visit mriyaid.org to learn more..

‘Whataboutism’ has become a veritable disease in our culture. It’s a convenient excuse for both the well meaning and the trolls to obfuscate, diminish, and distract us from the causes about which we care deeply. We readily admit that there are dozens of other just causes, oppressed peoples, and points of view. We encourage you to find yours and to do whatever you can to fight for them. If it’s a cause we share a passion for, reach out to us and maybe we can throw some sunlight your way. But this war, the Russian Invasion of Ukraine, and MriyaAid.org is the one we have chosen and the reason we are working tirelessly on this event.

IS IT DISRESPECTFUL TO DANCE WHILE OTHERS FIGHT?

This is a valid question with which we have struggled. To put the question plainly, should lucky Americans secure in their country dance on a beach while the folks they claim to support huddle in a bunker? We shared this concern ourselves so we reached out to the folks at MriyaAid for guidance. They posited this question in the internationally renowned Twitter Space in which they participate, the Walter Report for guidance.

On several occasions we offered these concerns so that the folks on the ground in Ukraine could share their feelings. To our relief the response towards our event has been 110% positive. Contrary to our fear that our celebration might be seen as offensive, the folks we spoke with told us that it would be welcome, inspiring, and a relief. Since we will be dancing with their souls in our hearts makes them feel heard, seen, and loved. They also hope that our little event will inspire others to produce similar outpourings of support for MiryaAid.org and the cause of a free Ukraine. This is also why we will be livestreaming the event so that folks over there can participate.