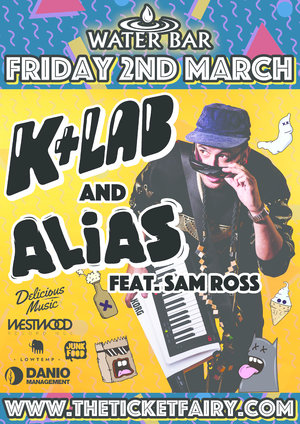 Water Bar is proud to present:

Returning by popular demand whilst on his WIGGIN AIN'T EASY TOUR this funkadelic bass heavyweight will be gracing the stage and playing on the biggest sound system in town with the super talented DJ ALIAS and the awesome SAM ROSS! This will be a night NOT TO BE MISSED!!!

Bring your dancing shoes for the ones and twos

GET YOUR TICKETS EARLY AND SEE YOU AT THE FRONT!

New Zealand master of intergalactic funk, K+LAB, has been rocking dance floors and bringing the heat to the masses since he first burst onto the scene with his debut album "Spacedirt" in 2013. An ever-expanding galaxy of FUNK, K+Lab's sound is always absorbing and incorporating a seemingly endless array of influences and vibes – the head-nod aesthetic of hip-hop, the futuristic techniques of Glitch-hop and the fury of drum n' bass – all tied together by an orbital pull of all things funky. Unlike anything else occupying the sonic landscape today, his music Armed with his signature keytar, K+Lab has been touring relentlessly for years, conquering dancefloors across Canada, Australia, USA, South America and his native New Zealand.

2016 brought release of his sophomore album, The Worldy's (Released on Gramatik's Lowtemp label), his 2nd album to be nominated for Electronic album of the year at the New Zealand Music awards which was followed by a slew of succesful singles including “Clap Ya Hands Now,” a collaboration with fellow funkmeister Stickybuds, that held the #1 spot on the Beatport charts for months and was picked up for the Spiderman Homecoming Trailer. A steady release schedule and an ear for Original, fresh and fat productions has solidified K+Lab as the best selling Glitch Hop artist of 2017 on the Beatport charts. The momentum from these releases powered the motherships thrusters and set the Captain K+Lab off into orbit on a long headline tour in support of The Worldy's album. His incredible, tight live performances have also garnered high profile slots at some of the world's most lauded dance festivals like Oregon Eclipse, Shambhala Music Festival, Breakfest, Motion Notion, Rainbow Serpent, Northern Bass and Earth Frequency. Keep your eyes open and your ears ready for K+Lab, a sonic supernova burning bright in an infinite galaxy of sounds.

Dj Alias is a Dj/producer from New Zealand, once a member of prominent NZ Hip Hop group "Fast Crew" he has continued to release a few bass heavy hip hop EP's on numerous independent record labels in New Zealand and UK.

He also is the mix engineer for New Zealand bands "Sola Rosa" and "Batucada Sound Machine" as well as other independent producers.

He has a host of new projects and collaborations underway as well as playing regular club sets and has a great audio visual Dj show.

Check out some tracks here - https://soundcloud.com/dj-alias-nz

Jody Direen band. fill in guitarist for The Feelers. Pistol Knights. Those Guys.